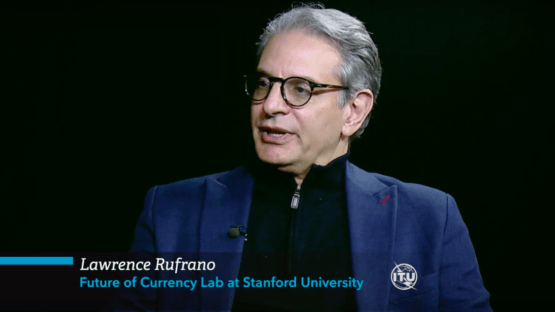 Why telecommunications form a core ‘principle’ for a new standard of banking: Stanford’s Rufrano

Ahead of the recent announcement that ITU and Stanford University will launch a new partnership supporting pilots of Digital Fiat Currency, Lawrence Rufrano of Stanford University’s Future of Currency Lab spoke to ITU about how technology is changing banking.

Mr Rufrano has been a participant in the ITU Focus Group on Digital Currencies, including Digital Fiat Currency, as well as a former member of the Federal Reserve Board in Washington, D.C.

At the conclusion of the Focus Group’s last meeting recently, Rufrano expressed that the results exceeded his expectations.

“I realized as a result of this conference and the series of conferences … that the technology really can be a very strong unifying force, not only in bringing the central banks together, but also in terms of creating a basis for a whole new set of regulations.”

“Think about telecommunications as a core foundational principle… for creating a new standard of banking and a new way of doing banking.”

Rufrano shared with ITU his insight as a former regulator and discussed the challenge of writing regulations without a unifying principle.

The core message Rufrano hopes viewers will take away from this is to “think about telecommunications as a core foundational principle… for creating a new standard of banking and a new way of doing banking.”

“Before we go through a very fragmented process of thinking about what FinTech means, let’s think about it in terms of this one core idea of telecommunications.”

Rufrano looks to bring back the same message to regulators following the Focus Group meetings, stating that “before we go through a very fragmented process of thinking about what FinTech means, let’s think about it in terms of this one core idea of telecommunications.”

With the conclusion of these focus groups, Rufrano notes that many projects are forthcoming.

“There will be a concerted effort on a part of members of the ITU to communicate again the messages which I just communicated to you … this idea of, “let’s really look at this foundational principle” … as the means of creating the next basis of regulations for banking.”

Plans for the formation of several laboratories are also in the works. One such laboratory will be at Stanford University in partnership with the IMF, the Bank for International Settlements and Oxford University.

Why telecommunications form a core 'principle' for a new standard of banking: Stanford's Rufrano

Share via
Why telecommunications form a core \'principle\' for a new standard of banking: Stanford\'s Rufrano
https://news.itu.int/why-telecommunications-form-a-core-principle-for-a-new-standard-of-banking-stanfords-rufrano/
X
How are governments staying safe? ITU releases its third Global Cybersecurity In…Cybersecurity/TrustBy ITU News More than half the world is now online for the first time ever. This is a significant step towards a more inclusive digital economy. But a…
Send this to a friend