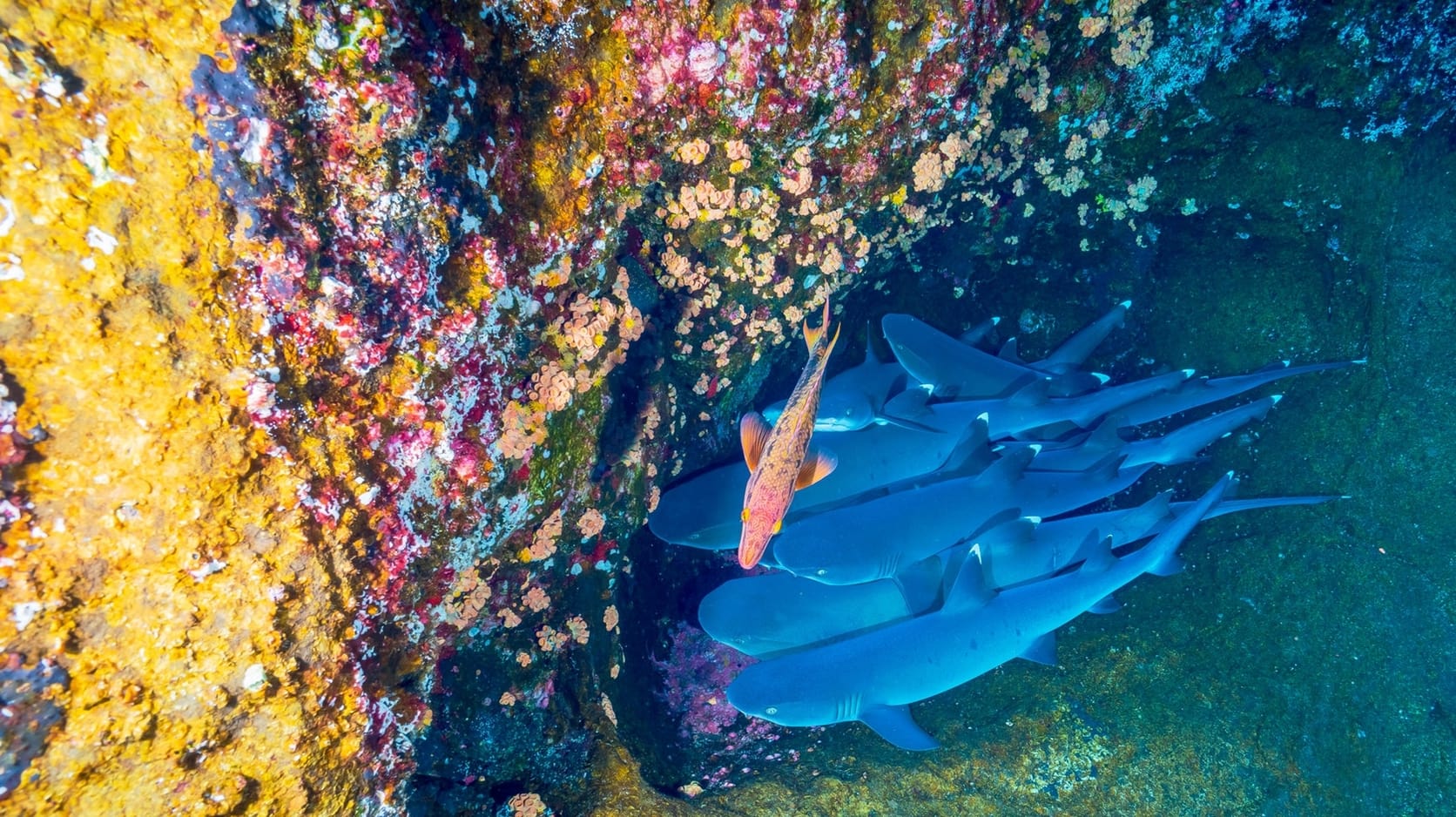 How technology can help save our oceans

Last week, off the coast of Thailand, a pilot whale was found struggling to swim and breathe. Attempts to rescue the animal failed and it died a few days later.

The autopsy revealed that the whale had more than 17 pounds of plastic bags and other trash clogging its stomach, which had made it difficult for the animal to digest food.

This is just one example of many species on the decline in our world’s oceans.

According to UNESCO’s Facts and figures on marine biodiversity, by 2100, without major changes, more than half of all marine species will be at risk of extinction.

The world’s oceans contain the greatest diversity of life on Earth and safeguarding them has become one of the world’s most important collective challenges. That’s why the United Nations’ Sustainable Development Goal No. 14 (SDG 14) specifically lists protecting Life Below Water as a priority.

Technological innovations are helping speed progress on SDG 14 by allowing better collection and use of data to inform ocean conservation efforts. Below, we list just a few such examples.

In the last 30 years, there has been a 40% loss of coral reefs in our oceans across the globe.

In order to understand the issues reefs face and assess their health, the XL Catlin Seaview Survey was developed. Its high-resolution and 360-degree panoramic vision recordings aim to monitor and reveal change over time.

“Technologies have taken on increased importance in monitoring ocean health as well as the activities that impact the oceans.” – James Oliver, IUCN

Leading scientific institutions including the International Union for Conservation of Nature (IUCN), the Global Change Institute and Underwater Earth are working closely with Google on the project, which began in 2012 on the Great Barrier Reef.

“The evidence-based science that technologies help provide is a critical component for organisations, such as IUCN, that work to influence policy and decision-making at the national and global level, especially with regard to transboundary marine resources,” said James Oliver, Programme Operations Officer at IUCN, speaking to ITU News.

Coral reefs are a strong indicator of ocean health and the XL Catlin Seaview Survey seeks to help scientists, policy makers and the public understand what needs to be done to protect both coral reefs and oceans.

United Nations agencies are joining together to explore undersea telecommunications cables and their applications for monitoring the ocean floor.

A ​Joint Task Force to investigate the use of submarine telecommunications cables for ocean and climate monitoring and disaster warning was launched in 2012 by the International Telecommunication Union, the World Meteorological Organization, and the United Nation’s Education, Scientific and Cultural Organization’s Intergovernmental Oceanographic Commission.

The ITU/WMO/UNESCO IOC Joint Task Force is developing a roadmap that could lead to submarine repeaters equipped with scientific sensors for ocean and climate monitoring and disaster risk reduction – especially early warning for tsunamis. It is also analyzing the potential renovation and relocation of retired out-of-service cables in this realm.

With the installation of new trans-ocean and regional telecommunication cable systems equipped with sensors, a global network could be established providing real-time data for ocean climate monitoring.

Researchers at King Abdullah University of Science and Technology (KAUST) in Saudi Arabia, in collaboration with the Red Sea Research Center, developed the ‘Marine Skin’ tag to be able to gather and analyze data geared towards preserving and enhancing marine life.

The lightweight tag is non-invasive and can be glued to the outer shell or skin of both large and small animals without disrupting their underwater behavior. 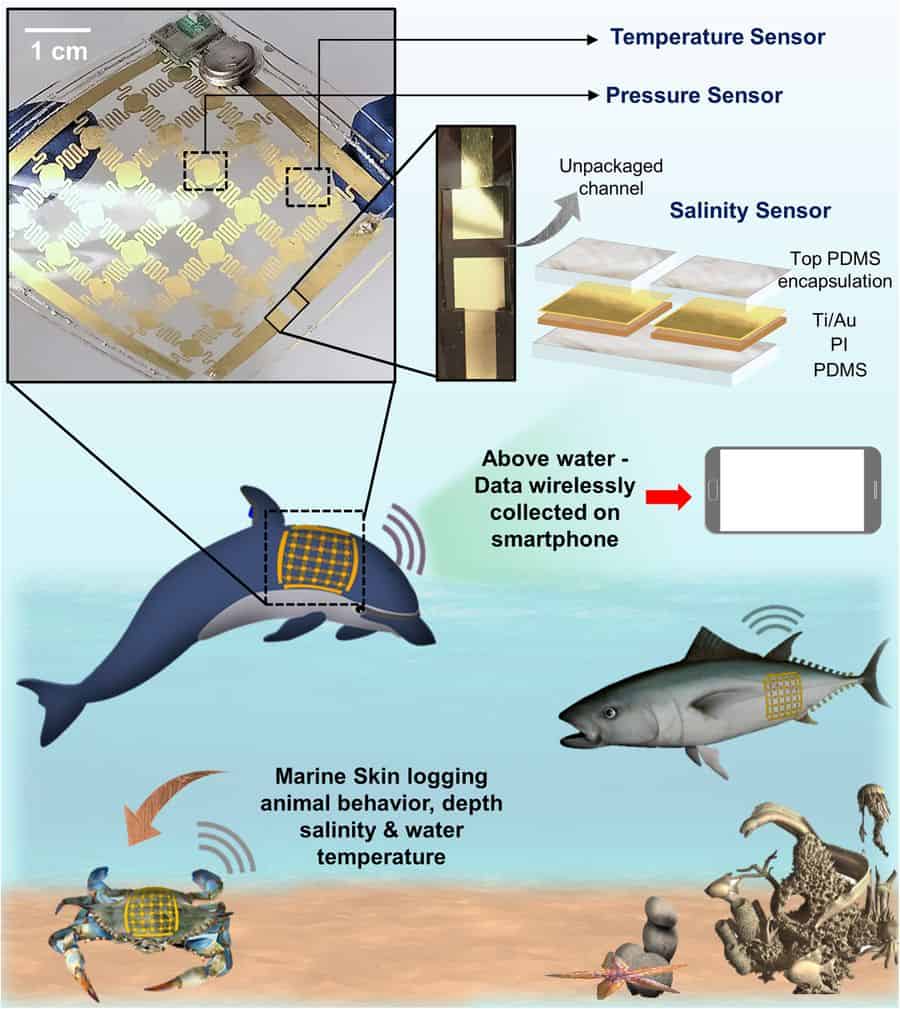 With a battery lifetime of five months, the device can wirelessly transmit data whenever the animal chooses to surface. The research team plan to tag as many as 200 marine species by the summer of 2019.

In 2014, researchers at the University of California, San Diego, (UCSD) built an artificially intelligent camera intended to monitor and track endangered species. The submergible system records video when it hears a vocalization created by a marine animal and produces relevant data for biological monitoring.

The SphereCam is powered by an Intel Edison compute module which allows for flexibility, energy efficiency and easy programming. In addition, the module can run on batteries for up to a week and fit inside the camera, preventing it from getting wet.

RELATED: 8 ways AI can help save the planet

The system was first created as a way to monitor the vaquita porpoise, but UCSD researchers are now working with marine biologists and conservationists as they study a vast array of species.

X
Conserving the ‘blue economy’ with ocean science and new technologies…Emerging TrendsBy the Intergovernmental Oceanographic Commission (IOC) of UNESCO The ocean represents the largest ecosystem on our planet, and it performs a number o…

How technology can help save our oceans

Share via
How technology can help save our oceans
https://news.itu.int/technology-saving-oceans/
X
The AI bandwagon: What’s stopping charities from jumping aboard?…Artificial IntelligenceBy Rhodri Davies Civil society as a whole – including charities, non-profits, non-governmental organizations (NGOs) and corporate social organisations…
Send this to a friend