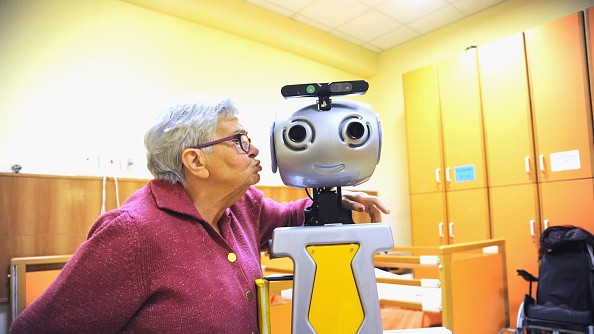 What do robot companions, matchmaking apps and spontaneous trips to Paris have in common? They’re all examples of ways technology can improve the lives of seniors.

As many countries around the world face aging populations, there is a growing demand for technologies that meet seniors’ needs. This is especially relevant for countries like the United States, where adults over 65 will outnumber children by 2030, and Japan, where more than 40% of the country will be over 65 by 2060.

Technology can help governments by providing solutions to meet the demands of this demographic shift affecting many parts of the world. For example, Japan’s government is working to use technology, including Artificial Intelligence (AI), Big Data, drones and robotics, to respond to the challenges of a shrinking workforce and improve healthcare and caregiving for the elderly as part of Japan’s “Society 5.0” digitization plan.

In addition to improving caregiving, tech innovations can help address loneliness, which has been linked to health issues such as cardiovascular diseases and dementia, says Davis Park, Executive Director of the Front Porch Center for Innovation and Wellbeing, a California-based organization that tests technologies to be used by individuals as they age.

“As more people live longer, growing concerns for older adults are not only health and financial insecurity,” says Kari Olson, the center’s President and Chief Innovation and Technology Officer. “Equally fundamental are important issues such as affordable housing and services, transportation, access to information and resources and, most importantly, quality of life.”

Maxine Duncan, 86, and Bert Yarbrough, 89, use a robot they named “Jimmy” to stay in touch with their children from their home at The Heritage Downtown, a retirement community in California.

Jimmy is a telepresence robot, which are remote-controlled, wheeled devices that use tablets and wireless connectivity to provide audio-visual communication. Duncan and Yarbrough’s children can control the robot to check in and catch up.

“It’s been a fun experience,” Duncan says. “It can’t give hugs yet, but it’s a nice companion, especially if you were by yourself.”

RELATED: AI will disrupt the world as we know it: Anastassia Lauterbach

Robots like Jimmy, which is made by tech company OhmniLabs, can help reduce loneliness for seniors and offer their family members peace of mind, says Dr. Thuc Vu, the company’s CEO and co-founder.

“Ohmni robots are a great way to improve senior’s lives by allowing them to enjoy meaningful and positive interactions with their families and friends – without the complexity and limitations of previous solutions,” he says.

Plus, he adds, “Who doesn’t want to drive a robot?”

Having a robot in the room takes advantage of the psychological benefits of face-to-face interaction by making the patients feel more engaged, says Dr. Cory Kidd, the company’s founder and CEO.

“We have trouble scaling care in the traditional way,” he says. “Where everything falls short is in engaging us on an ongoing basis. That’s the key problem that having a robot in the room solves.”

And then there are the robots like “Paro,” a soft robotic baby seal designed by an engineer at Japan’s National Institute of Advanced Industrial Science and Technology. Robotic pet companions like Paro can help brighten people’s moods, Olson says.

“We have qualitative data and stories of residents who were staying in their rooms or weren’t speaking, who are now coming to life and engaging with their caregivers, family and other residents in the presence of a tool like this,” she says.

For example, MIMO Care, an assistive-care technology, uses sensors to monitor seniors and uses the data as a form of predictive care by alerting caregivers of issues.

RELATED: The future of the Internet of Things will be ‘EPIC’: report

Integrated with Amazon’s Alexa, the tool acts as “friendly interface” to screen and respond to potential threats – even, for example, by getting Alexa to bark like a dog to ward off intruders, says John Williams, the company’s CEO and founder.

“IoT basically creates an envelope of wellbeing where the elder is living their daily lives,” he says. “Unobtrusive, that envelope is working 24/7 for their benefit.”

Other companies are turning to the virtual world to help address the issue of social isolation.

Group VR sessions allow seniors, especially those facing health issues that prevent them from leaving their rooms, to experience fun, movement and wonder – just by putting on a headset, he says.

‘What better way to keep our brains healthy than to make sure that we have continual, meaningful access to meaningful cognitive stimulation?’ – Kyle Rand, Co-Founder and CEO, Rendever

“You put one on and you can be anywhere in the world, and you could be doing anything,” Rand says. “What better population to apply that to than seniors?”

The virtual experiences range from visiting the top of the Eiffel Tour, to sitting in a room full of puppies, to walking down the street where the person grew up. The hope is that these experiences can help seniors feel engaged and connected to the world around them, Rand says.

“What better way to keep our brains healthy than to make sure that we have continual, meaningful access to meaningful cognitive stimulation?”

Another way tech start-ups are combating isolation is by providing services that connect seniors to potential caregivers and to each other.

For example, start-up Papa promises to match seniors to college students via an app. The student “Papa Pals,” which have also been called “grandkids on-demand,” provide services ranging from taking seniors to the grocery store to helping them set up their smartphone to providing company.

‘So often, our technology focus is on our youth, which is important, but we must remember to include our older generations as well — and in fact embrace initiatives that are actively inclusive.’ – Olson

Another example is Silvernest, a company that connects seniors looking for roommates. Called the “Airbnb for AARP,” the service functions as a home-share app that seeks to address poverty and isolation by matching aging adults who own a home that has unused space with compatible long-term roommates.

To fully realize the potential of technology to positively impact the lives of older adults, we must ensure seniors and their caregivers have affordable broadband access, digital literacy tools and cyber-safety education, Olson says.

“So often, our technology focus is on our youth, which is important, but we must remember to include our older generations as well — and in fact embrace initiatives that are actively inclusive.”

Photo Caption: Italy is another country experiencing an aging population. In the photo above, an elderly lady kisses a robot during daily activities of the project Robot-Era at nursing residence San Lorenzo in Florence, Italy, on December 19, 2015. Photo by Laura Lezza/Getty Images.

Share via
From robots to virtual reality: 4 ways tech can improve seniors’ lives
https://news.itu.int/tech-seniors-lives-robots-ai-iot-vr/
X
ARM predicts 1 trillion IoT devices by 2035 with new end-to-end platform…Emerging TrendsBy Ian Scales, TelecomTV ARM pulls together the pieces for an end-to-end IoT platform Pelion will manage IoT devices at scale And will be able to deal…
Send this to a friend