Is software taking over the auto industry?

There is something about an automobile that simultaneously inspires romance, anger and frustration.

We fall in love with an MG or an Aston Martin or a Porsche, enthralled in the animalistic experience of moving through space in an almost sentient machine.

But bringing that machine to life increasingly requires lots of code — and that’s where the romance yields to frustration. There was a time when frustration was confined mainly to the electronics. The mechanicals were reliable, but the electricals were always on the verge of betrayal.

That frustration, previously the province of wire harnesses and relays, has transferred to the software. The millions of lines of code in cars that we hear so much about – more code than a 747, the space shuttle, or a fighter jet.

There are many more opportunities in cars today for things to go wrong as software takes over an ever-expanding array of functionality, from the car stereo to enhanced safety systems and the vehicle powertrain.

There are software bugs, updates, conflicts and, lately, cybersecurity vulnerabilities to worry about so it is perhaps no surprise that software is figuring in vehicle recalls.

The expanding role of software and the growing number of software-related recalls reflects an emerging battleground in the industry.

This expanding crisis in vehicle recalls is both good news and bad news for the automotive industry.

The good news is that software recalls can often be corrected with over-the-air software updates. The bad news is that auto makers are in the very earliest stages of deploying software updating technology and, particularly in the U.S., they have yet to sort out conflicts with state-level dealer franchise laws that require warranty service work such as software updates be handled by dealers. 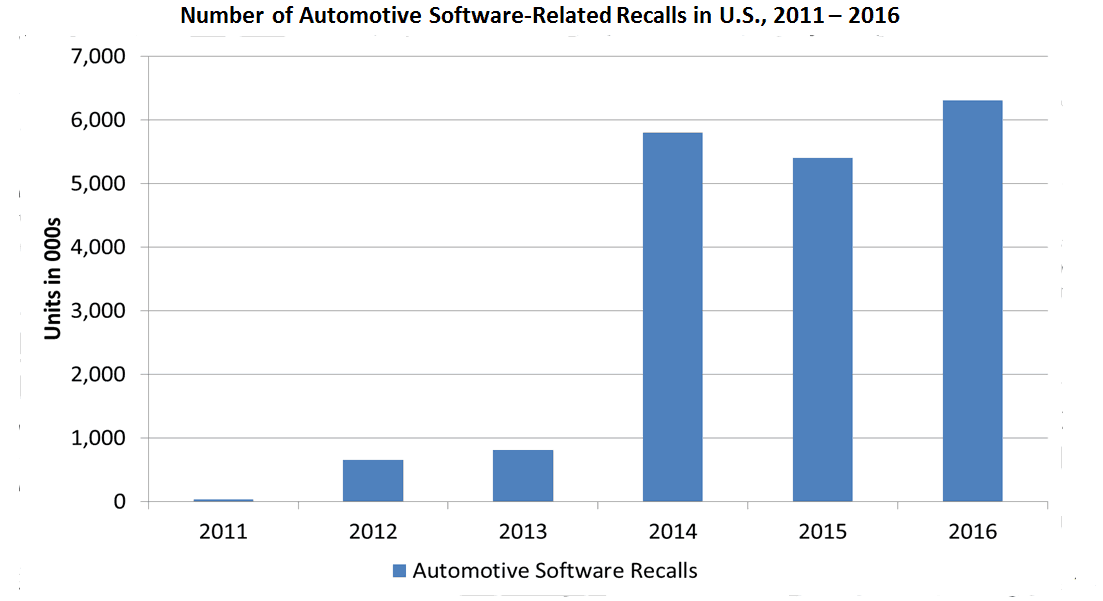 The expanding role of software and the growing number of software-related recalls reflects an emerging battleground in the industry. The creation of software is expensive and labor intensive and also poses an ownership question.

Starting approximately 10 years ago with BMW and Intel’s mutual effort to bring Linux into cars on a larger scale via the GenIVI Alliance, auto makers have been seeking to segregated hardware from software in such a manner that hardware could conceivably be relegated to sourcing from contract manufacturers (like Flextronics) and software development costs could be reduced by sharing code. At the same time, car makers have sought to take ownership of the code written for their vehicles.

Car enthusiasts have taken issue with the ownership question, asserting their right to modify vehicle software as they see fit. That particular struggle is yet to be resolved but has gained new life as more tinkerers experiment with home-grown self-driving car technology.

For car makers, the onset of self-driving car technology has brought with it a wave of in-sourcing of software development even as external development activities have grown. Tier 1 suppliers have made strategic acquisitions (Continental/Elektrobit, Harman/Symphony Teleca, Panasonic/OpenSynergy) to shore up their coding resources even as OEMs have made acquisitions and investments intended to expand in-house capabilities.

Over-the-air software update technology is increasingly essential to the process of managing this avalanche of code. (Strategy Analytics has published a comprehensive report on the subject: “Automotive OTA Updates – Market Status and Solution Providers“)

Car makers and their dealers will have to sort this issue out once and for all – particularly given the urgency of some safety and cybersecurity related updates and the increasing volume. Consumers will not tolerate required repeated visits to dealers – and car makers cannot tolerate the cost of those visits.

There is cause for concern from the market leader in over-the-air updates – Tesla Motors. A recent lawsuit filed by a Tesla owner over alleged vehicle and customer service failures, several of which appear attributable to software, highlight the potentially grim prospect facing the industry if it fails to properly implement software-update technology.

These challenges are significant given that Tesla has sought to use software updates as an essential differentiating factor for its cars as well as a means for delivering automated driving technology to the market. Tesla pioneered the concept of adding value to its cars after the sale in an industry characterized by dramatic post-sales value reduction.

Tesla has varied the tempo of its software updates, and in most cases the updates have included free enhancements to vehicle performance along with bug fixes. The original Autopilot was delivered via software update – turning on capability already resident in existing on-board sensors.

But enhanced driving characteristics were not always delivered for free. They often cost thousands of dollars – paving the way for monetization of software updates by car makers. But growing questions regarding the software behavior in Tesla vehicles will raise questions later this fall when Tesla CEO Elon Musk promises to deliver what he claims will be fully automated driving capabilities via software update.

For the rest of the industry, the challenge of delivering software updates is more basic and the deployment of the technology is gaining momentum with the help of companies such as Harman, Blackberry, Intel, ATS, Excelfore, Wind River, Delphi and others.

Software updates will be essential to surviving the onset of industry-eating code without getting indigestion.

The original version of this article was first published on the Strategy Analytics website.

Views expressed in this article do not necessarily reflect the views of ITU.

Is software taking over the auto industry?

Share via
Is software taking over the auto industry?
https://news.itu.int/software-taking-over-auto-industry/
X
5 things to watch for at ITU Telecom World 20175GBy ITU News ITU Telecom World 2017 is the International Telecommunication Union’s (ITU) marquee event, which provides a global platform for government…
Send this to a friend