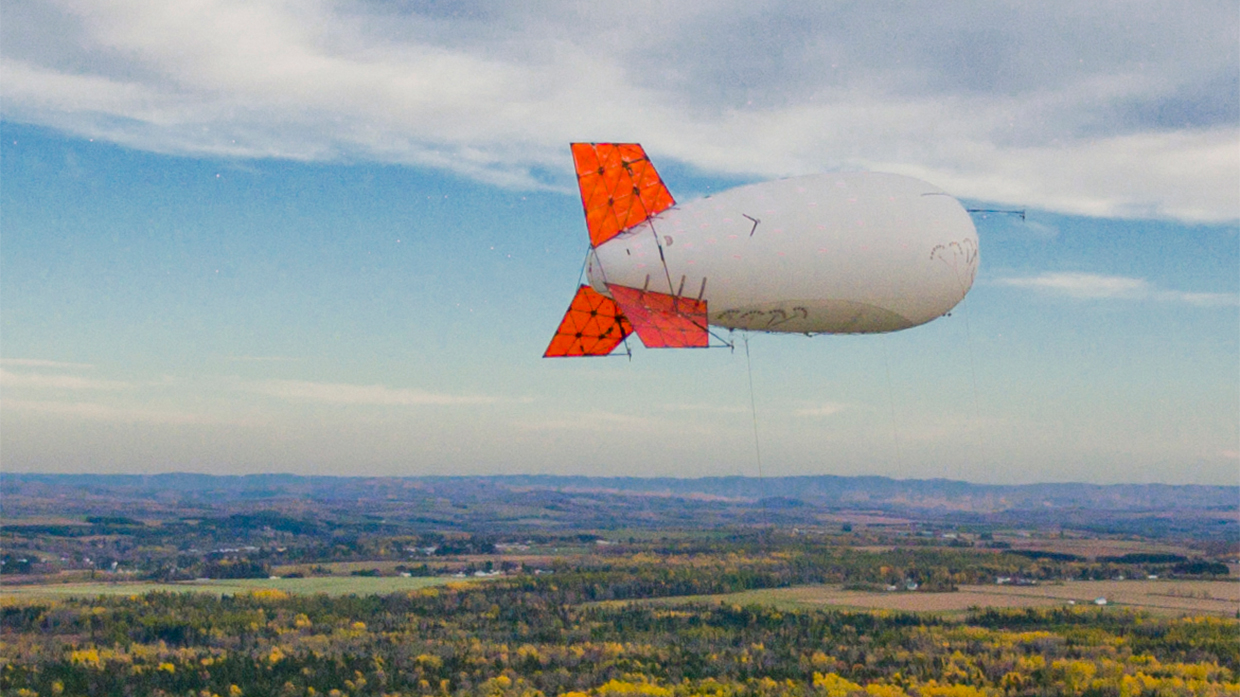 It’s 2018 and more than 16 million people living in the rural United States still lack adequate access to mobile broadband. But building out that infrastructure is an expensive endeavor. One analysis from 2017 estimates it would take 37,500 new cell phone towers and run upwards of $12.5 billion to bring 4G to rural areas in the United States, including Alaska, Hawaii, and Puerto Rico.

The team at Altaeros, a Massachusetts-based company, thinks they have a better plan. Their SuperTower platform employs a tethered, autonomous aerostat that can lift antennas and receivers to an altitude of 250 meters (820 feet) to deliver mobile broadband to underserved communities. One aerostat can provide coverage for up to 10,000 square kilometers (3,860 square miles), an area that would normally require between 20 and 30 cell phone towers. As a result, the cost of deployment is about 70 percent cheaper than the conventional infrastructure, says Ben Glass, CEO of Altaeros.

Because the technology is mobile and can be set up in a couple of days, a SuperTower could be used for a range of other applications, including environmental monitoring and short-term events, like concerts or rallies, where crowds of people might otherwise overburden a network’s capacity. A future version meant to be towed behind a truck could be set up in a matter of hours for crisis response and disaster recovery.

Last fall, the company ran a successful test flight of a 15-meter-long (50 feet) prototype using cellphone radio receivers and antennas from Ericsson. Now, it’s working toward building a commercial version about twice the size for deployment later this year. By 2019, Altaeros hopes to expand to other states, and eventually to other countries.

One tethered, autonomous aerostat flying at 250 meters can provide as much coverage as 20 or 30 cell towers.

Aerostats, airships, and blimps aren’t new. They were invented in France in 1783 and since then have been used to transport people, cargo, and carry radar systems for military surveillance operations. When Altaeros first started up in 2010, the company was focused on using aerostats to lift wind turbines into strong winds blowing at high altitudes to generate renewable energy.

But when the price of oil dropped from $100/barrel to $35/barrel in 2014, the company had to rethink their business model, says Glass. “Telecom was always in the back of our minds,” he says.

The company repurposed its autonomous platform to focus on providing mobile broadband. Autonomy is where Altaeros’s innovation lies, says Glass. Conventional aerostats require a sizable ground crew, upwards of 10 or more people, to operate the tethers and winches needed to send the aerostat up to the necessary altitude and bring it back down. The crew itself can represent 70 percent or more of the total operating cost. A fight director manages the crew, using real-time data from weather forecasts, the state of the aerostat, and the objectives for the missions to make decisions about when to launch, when to land, and how to adjust the system in between.

The SuperTower does all of that itself. It’s launched automatically from a rotating ground station. Three tethers keep it aloft, one of which delivers both power and data. A computer program gathers real-time weather forecasts and information from sensors on the aerostat to make decisions about how to operate the system, at which altitude to fly, in which direction to point, and when to land.

In the rare occasion that weather conditions are too severe for flight, the system will reel the aerostat back in until it’s time to fly again. (During these times, residents would have to rely on landlines or other forms of communication to contact emergency services, if they were needed.)

Like fixed cell phone towers, the SuperTowers are being designed so that each one is able to support radio receivers and transmitters from multiple carriers, which will give rural residents the same kinds of options available to city dwellers. A fleet of SuperTowers around the country could be monitored remotely from a single network operating center. If an aerostat needed servicing, it will send an alert to a person at central command who can then send a ground crew to the site.

Nicol Turner-Lee, a fellow of Governance Studies in the Center for Technology Innovation at the Brookings Institution, said that no matter what solution a tech company has for bringing mobile broadband to rural areas, they have to consider the customer.

“Consumers, at the end of the day, are expecting so much more from the Internet,” she says. They need a network that can accommodate kids doing their homework as easily as farmers installing sensors to monitor crops. “You’re not solving the rural divide if all consumers can do is get movies,” she said.

In a serendipitous twist, the SuperTowers will also fulfill one of Altaeros’s original goals: to reduce global carbon emissions. Glass says that as part of their research, they discovered that emerging telecom markets in developing countries use diesel generators to power remote cell phone towers. In India, for instance, the telecom industry is the third largest consumer of diesel gas.

A SuperTower can be set up near an electrical power grid. Even if it requires a generator, it would use just one in the same area that 20 or 30 generators that might have been needed to power cell towers for an area of the same size.

“Even though we aren’t generating renewable energy, we are able to reduce the carbon footprint,” he says.

The original version of this article first appeared in IEEE Spectrum. Views expressed in this article do not necessarily reflect those of ITU.