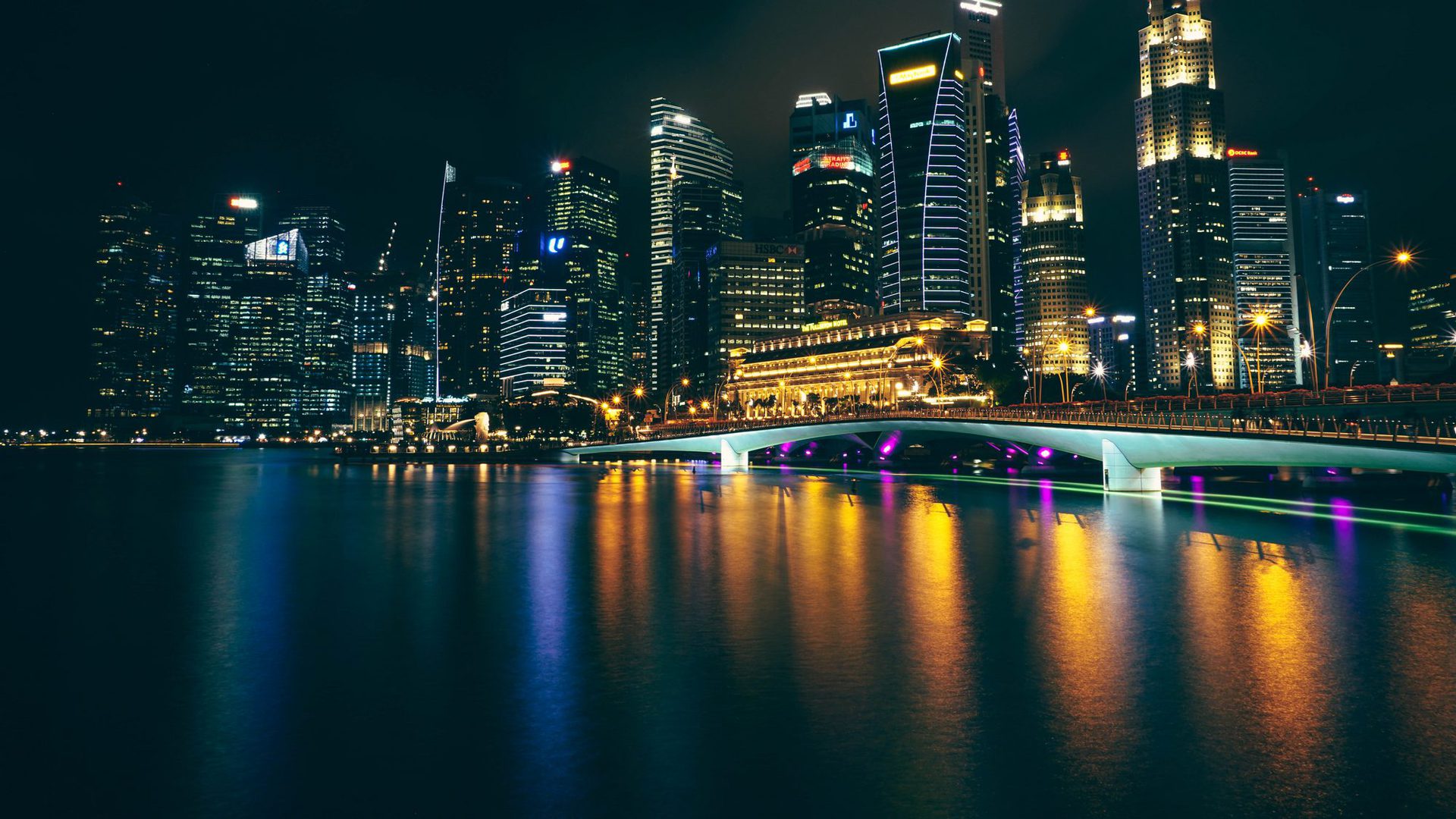 The story of Singapore’s birth in 1965 is ingrained in the population to this day. The single-layer government knew at the time that it had to be creative to build Singapore’s economy.

Since then, the city-state with few natural resources has grown to become one of Asia’s most successful countries. Its use of innovative finance to rid the city of slums and provide dignified public housing to the majority of its citizens has been hailed at many urban conferences as an example to other developing economies.

“The Singapore government has never shied away from taking calculated risks in investing in the future,” says Dr Yaacob Ibrahim, Minister for Communications and Information.

Fifty-three years later and now one of the most developed and richest countries in the world, Singapore is pursuing its smart nation strategy to protect its technology and growth prospects in the region.

“Singapore needs to innovate and enhance its growth strategy to overcome our physical limitations and bring good jobs and opportunities to all Singaporeans,” adds Ibrahim. “As part of Singapore’s roadmap to become a smart nation, our enhanced growth strategy for the digital economy will go hand-in-hand with our digital government strategies.”

Launched in 2014 by Prime Minister Lee Hsien Loong – himself a computer coder – the Smart Nation plan encourages innovation and collaboration between citizens and companies in order to improve growth and the lives of people. Despite being heavily pushed and backed by the government, officials repeatedly emphasize that a smart nation is not built by government, but by everyone – citizens, companies, and agencies.

In May last year during Innovfest Unbound–an anchor event of Smart Nation Innovations Week–Ibrahim announced a new national programme to further develop artificial intelligence (AI) and data science to “invest in deep capabilities to catch the next wave of scientific innovation”. AI.SG, as it is known, will draw on partnerships with other government departments, research institutions, AI startups and companies developing AI products.

“The potential gains from an enabling technology like AI are massive. These technologies have begun to disrupt and redefine the way we live, play and work. They also bring immense opportunities for growth, if we can harness them and build new capabilities.” – Dr Yaacob Ibrahim, Minister for Communications and Information

One area where the government hopes to see a return on its US$109 million AI investment is in tackling challenges in transport and urban management. Other sectors include finance and healthcare.

Data has also been identified as a key growth stimulant. According to the National Research Foundation, more than 50 percent of Southeast Asia’s data centres are located in Singapore. The city-state wants to take advantage of this and create data-driven solutions to not only improve the lives of citizens but also build products and services that can reach into regional or global markets.

Expanding the use of personal data might be anathema to cities in North America or Europe, but in Singapore the GovTech agency began looking outside traditional data sources on unemployment and GDP to assess areas of potential economic growth. The Pulse of the Economy uses real-time big-data sources, such as the amount of electricity used in a certain area of the city, or the number of people getting off at a bus stop, to provide an up-to-date picture of economic activity in a certain area.

Chan Cheow Hoe, Government CIO and Deputy Chief Executive of GovTech, says that government agencies are then able to identify areas of growth and formulate strategies. One example of where this could be used is in assessing crowd density data to see how people commute and use parks and other social amenities. The data can also be used to inform transport modelling to relieve congestion and provide public transport alternatives.

It is this ability to tap into the extensive powers of the national government that distinguishes Singapore from other cities. Even with startups, the government looks beyond Singapore.

“We don’t see Singapore as an end market for startups but a starting point, and we see how we can help them to get into other markets,” explains Hock Yun Khoong, Assistant Chief Executive, IMDA.

Khoong oversees the country’s startup ecosystem. It’s a unique approach that doesn’t give grants but rather provides accreditation to allow startups to deal directly with government agencies to sell their wares and earn revenue for their next growth phase.

Khoong thought government could play a role. Two and half years ago the then IDA began an accreditation process that assesses startups through due diligence on their technologies and whether they line up with government needs.

“We look to see if they have a track record and if there is some value in what they are doing,” he explains. “Our role is to help them scale up.”

If their commercial and financial models pass the test, they are placed first in the queue for government purchasing and procurement. If any government entity wants to buy and use technology, the startups get the first call.

To date, only 17 startups have passed the stringent process but have generated US$50.6 million in revenue. Those that don’t receive accreditation are told where the problems lie and to come back and try again once these are fixed.

“There are 50 startups in the pipeline that aren’t quite there yet,” says Khoong. “We are ‘farming’ them, working with them to get up to speed. It is a fairly strict process. It is so strict that companies now have term sheets that they will not invest in startups unless they are accredited by the IMDA.”

Singapore is acutely aware of its geographical size and its diverse population of 5.5 million. Not wanting to create a digital divide, the importance of cohesiveness is paramount to all government growth policies. As Ibrahim says: “No Singaporean will be left behind”.

“I spent a lot of time in the US,” explains Kiat How Tan, Chief Executive of IMDA. “There, if you don’t like a certain administration at the city or state level, you can just change city, or move from one coast to the other. There is a certain choice. In Singapore, no matter where you go you are still in Singapore.”

Tan is just six months into his new role running the IMDA, having previously worked at its predecessor, the IDA, where he helped to develop the Intelligent Nation 2015 plan. He sees the digital society as an inclusive society and as a tool to remain relevant in a changing world.

“Singapore today is one of the key financial sectors of the world. We don’t have oil but we have one of the largest oil petroleum refineries in the world,” he says. “Most shipping around the world comes through Singapore.”

He says that the country has to leverage its ingenuity into new fields as “these things don’t just happen by accident.”

Day-to-day business of running a city

While Singapore is happy to take a punt on new technologies, collecting headlines worldwide, it also has an interest in improving the often-mundane day-to-day running of a city. Again, cohesiveness runs deep.

The Municipal Services Office, to garner better feedback from citizens, launched a one-stop-shop municipal portal and app, in 2015. It may not be cutting-edge but the OneService Mobile App and Portal has evolved to become a transparent, multi-channel network, connecting government with residents as well as residents with one another.

Between January and December 2016, a total of 688,977 municipal feedback cases were captured through the OneService app and portal, averaging 57,415 cases per month or 1,888 cases per day. One offshoot has been a strengthening of the collaboration with Town Councils. All 16 Town Councils have been integrated into the feedback management system.

The number of agencies, departments and other arms of the government all working on the smart nation project is a little bewildering and confusing to the outsider–including this correspondent. But as Tan noted: “We don’t have all the answers, where the trends are or where the pitfalls are. We are embarking on a new journey–I would say an adventure–and it will be an exciting one where change will be constant”.

The original version of this article first appeared on Cities Today.

Share via
Singapore\'s data strategy targets regional growth -
https://news.itu.int/singapores-data-strategy-targets-regional-growth/
X
3 ways mobile is solving the global identity crisis…Emerging TrendsBy Mats Granryd, Director-General, GSMA Over a billion people cannot prove who they are. As a result, they can’t access life-enhancing services such a…
Send this to a friend