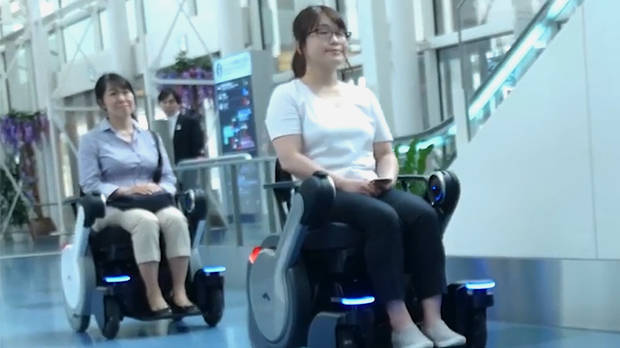 In Japan and Singapore, self-driving wheelchairs debut in hospitals and airports

Autonomous vehicles can add a new member to their ranks—the self-driving wheelchair. This summer, two robotic wheelchairs made headlines: one at a Singaporean hospital and another at a Japanese airport.

The Singapore-MIT Alliance for Research and Technology, or SMART, developed the former, first deployed in Singapore’s Changi General Hospital in September 2016, where it successfully navigated the hospital’s hallways. It is the latest in a string of autonomous vehicles made by SMART, including a golf cart, electric taxi and, most recently, a scooter that zipped more than 100 MIT visitors around on tours in 2016.

The SMART self-driving wheelchair has been in development for about a year and a half, since January 2016, says Daniela Rus, director of MIT’s Computer Science and Artificial Intelligence Laboratory and a principal investigator in the SMART Future Urban Mobility research group. Today, SMART has two wheelchairs in Singapore and two wheelchairs at MIT being tested in a variety of settings, says Rus.

The robot’s computer uses data from three lidars to make a map.  A localization algorithm then determines where it is in the map. The chair’s six wheels lend stability, and the chair is designed to make tight turns and fit through normal-sized doorframes. “When we visited several retirement communities, we realized that the quality of life is dependent on mobility. We want to make it really easy for people to move around,” said Rus in a recent MIT statement.

“The autonomous wheelchair could be very useful in any pedestrian environment—including hospitals and airports —and we are exploring all these possibilities.” – Daniela Rus, Director of MIT Computer Science and Artificial Intelligence Laboratory

A second autonomous wheelchair recently premiered at Haneda Airport in Tokyo, designed by Panasonic and Whill, Inc., creator of the Model A Whill wheelchair, a sleek, hi-tech wheelchair now on the market in Japan and the United States.

According to a recent press release, Panasonic is planning to conduct technical trials of the WHILL NEXT this year. Like the SMART wheelchair, the WHILL NEXT uses sensors to detect nearby obstacles. It also employs automation technology developed for Panasonic’s autonomous (and adorable) hospital delivery robot, HOSPI. The wheelchair identifies its position, selects routes, and moves to a chosen destination based on a user’s input into a smartphone app. It can even be hailed with the app – the Uber of wheelchairs.

The WHILL NEXT is also able to sync up with nearby wheelchairs to travel in a column, which is useful for a family or a group, the company notes. Best of all, each wheelchair automatically returns to its home base, reducing the need for airport staff to collect the chairs.

Beyond use in hospitals and airports, the SMART team says they envision a connected autonomous mobility system, where a user could use a scooter or wheelchair indoors at an office, zip outside and pick up a golf cart to cross the parking lot, and slip into an autonomous car to drive home. Recent studies with the scooter suggest the control algorithms work indoors as well as out, according to a press release last year. “The autonomous wheelchair could be very useful in any pedestrian environment—including hospitals and airports —and we are exploring all these possibilities,” Rus tells IEEE Spectrum.

Yet the field faces the challenge of commercialization. Not all hi-tech wheelchairs have sold well, such as Dean Kamen’s stair-climbing iBot, whose $25,000 price tag was one reason the device was discontinued in 2009. But hopefully the next generation of wheelchairs won’t be as expensive, says Rus. “The system consists of an off-the-shelf wheelchair augmented with an autonomy package. We hope the price point of the autonomy package can come down to make the system affordable.”

The original version of this article first appeared in IEEE Spectrum.

X
Why utility companies in Asia Pacific are only ‘dabbling’ in IoT: IDC…Emerging TrendsBy TelecomTV Utilities in Asia-Pacific excluding Japan are yet to scale out IoT deployments 97 per cent of utilities have some kind of IoT activity Ye…

In Japan and Singapore, self-driving wheelchairs debut in hospitals and airports

Share via
In Japan and Singapore, self-driving wheelchairs debut in hospitals and airports
https://news.itu.int/self-driving-wheelchairs-debut-in-hospitals-and-airports/
X
How IoT is disrupting the logistics industry – and spurring opportunities…Big DataBy ITU News The recent news that Tesla is developing a prototype for fleets of long-haul autonomous trucks was the latest example of how emerging tech…
Send this to a friend