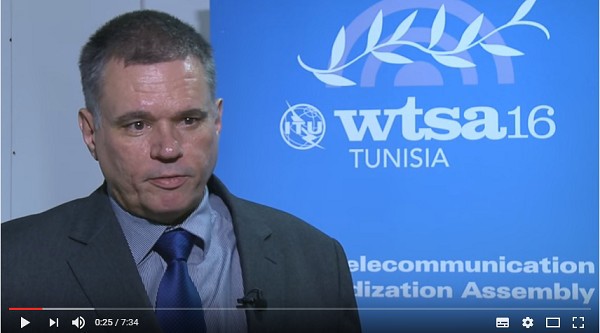 Safaricom’s Ronald Webb on why Kenya is ‘No. 1’ for financial and digital inclusion (VIDEO)

The burgeoning area of Financial Technology – commonly referred to as Fintech – and the role of digital financial services (DFS) have been hot topics of discussion at the World Telecommunication Standardization Assembly 2016 (WTSA-16) in Hammamet, Tunisia this past week.

Ronald Webb, Director of Financial Services for Safaricom explained how the company achieved its now world-famous success in providing millions of Kenyans with mobile money services, such as M-Pesa.

“In Kenya, we’ve become No. 1 in the [Brooking Institute] world rankings for financial inclusion – and that’s been entirely on the back of digital financial services, and that’s primarily been M-Pesa. We’ve got 75%, at least now, of the economically active adult population using M-Pesa. … Most of the GDP each year goes through our platform.”

The role of regulation in innovation was a key point for this success, Webb noted.

“In Kenya, we were extremely lucky,” he said. “We had an understanding regulator who basically said to us: ‘We don’t understand this. We think it has some huge potential, so we are going to have a light-touch regulation.’ … So all of the regulation that we have now, actually came in after we were able to innovate. … The central bank and other regulators in Kenya have received massive plaudits for their approach in how they allowed M-Pesa to take off as the first in the world.”

Webb also discussed the role of blockchain technology towards the future of mobile money, especially for social inclusion. “I see enormous use there for particularly countries that do not have a national identity system,” he said. … Blockchain will also flatten the intermediary chains between one transacting party and the other. … I see tremendous upheaval coming around blockchain in the future.”

To learn more about what’s next for digital financial services, watch Mr Webb’s interview with ITU News below.

Safaricom's Ronald Webb on why Kenya is 'No. 1' for financial and digital inclusion (VIDEO)

Share via
Safaricom\'s Ronald Webb on why Kenya is \'No. 1\' for financial and digital inclusion (VIDEO)
https://news.itu.int/safaricoms-ronald-webb-on-why-kenya-is-no-1-for-financial-and-digital-inclusion-video/
X
New ITU standard: eco-friendly universal chargerICT4SDGBy Lucy Spencer ITU has approved a new environmentally friendly standard for a universal charger for laptops and other portable devices. The new stand…
Send this to a friend