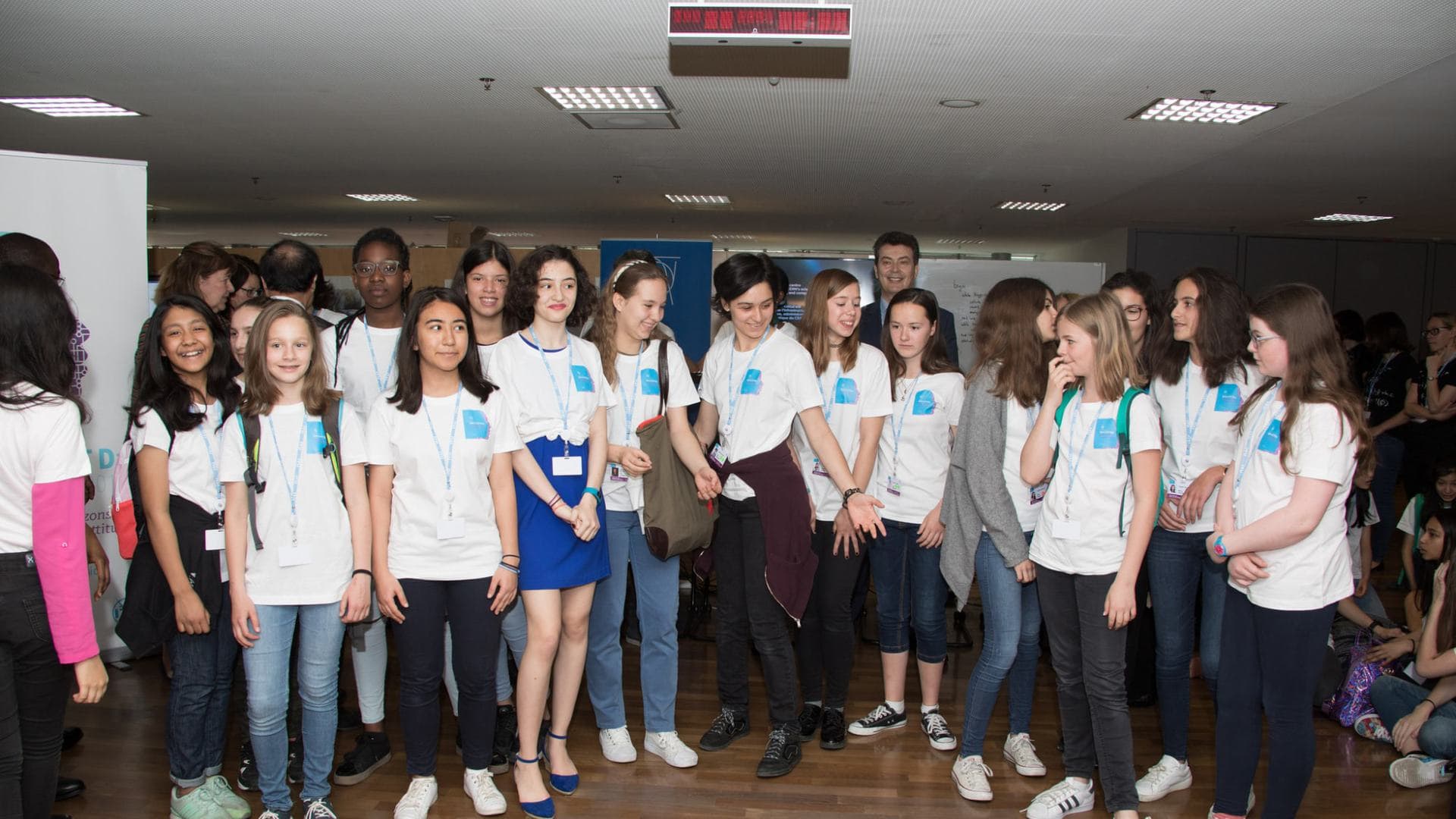 To celebrate Girls in ICT Day, ITU recently organized a half-day event at the ITU headquarters, where over 150 schoolgirls participated in mentoring sessions and interactive workshops presented by professionals in the fields of science, technology, education and mathematics (STEM). Among the participating organizations was the European Organization for Nuclear Research (CERN).

Ms. Maria Alandes Pradillo, computer engineer at CERN, shares her perspective on why encouraging young girls to study STEM is so important.

I had the opportunity to participate in the Girls in ICT Day event organized by ITU on the 26th of April. Together with several CERN colleagues, we facilitated a robotics workshop and participated in the speed-mentoring sessions. It was great to meet colleagues at ITU and other organizations and learn what people in the field are doing to promote science and technology among young people, in particular girls.

I had the chance to speak to different groups of girls during the mentoring activity. It was interesting to hear their questions, such as: “Are there many women at CERN? How did you know you wanted to be a computer engineer?”

It has been a long time since I was in the same situation as these girls. 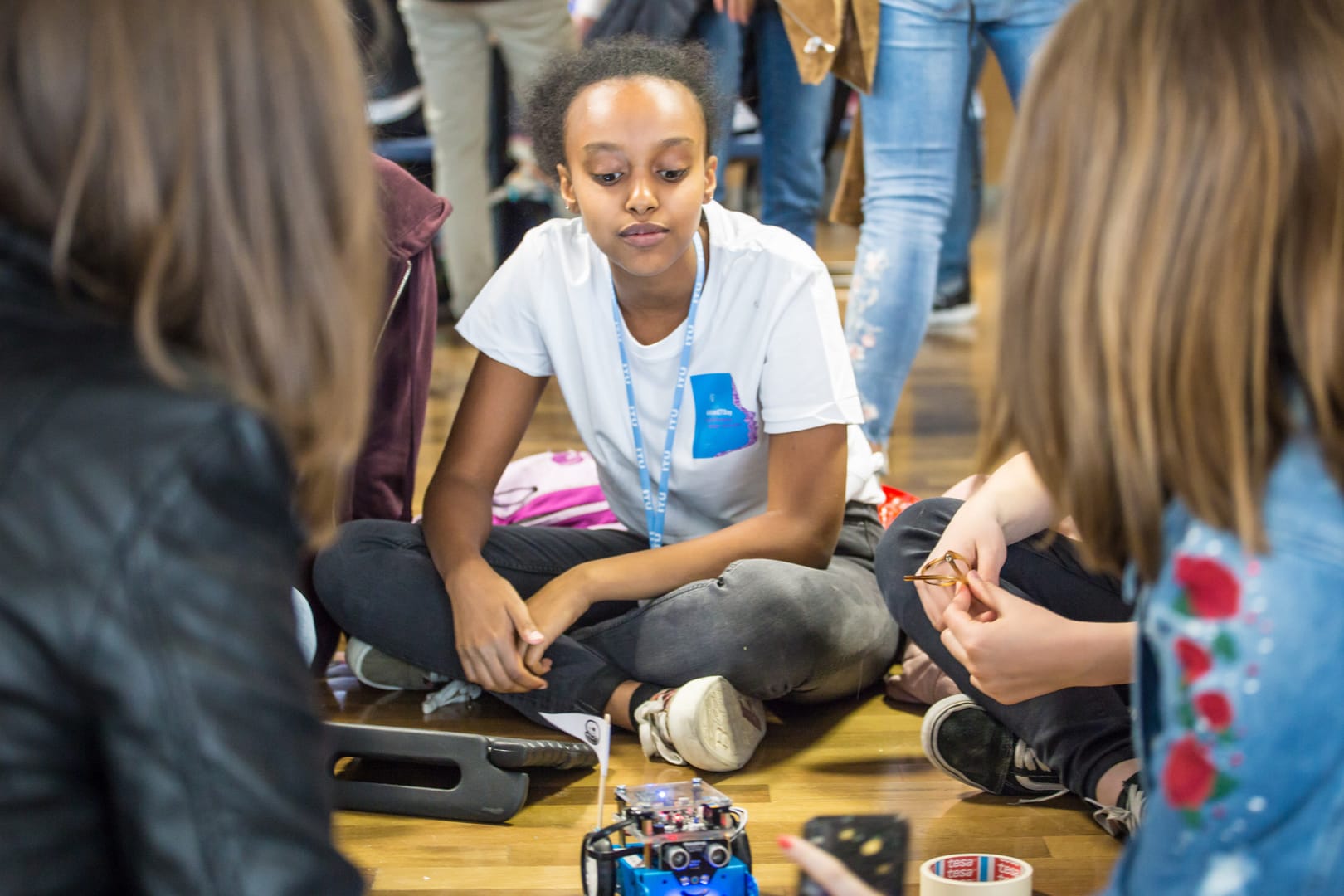 When I had to choose my university degree, I did not have a clear idea of what I wanted to be, but I knew that I wanted to study something that would allow me to find a job anywhere in the world.

At that time, ICT jobs were on high demand in many countries. Moreover, I was very interested in computers. That was in the 90s, when personal computers were starting to become more common.  I had one, and it was so exciting to have the “working tool” available in my own house any time of the day! This made me choose Computer Science as my university degree.

It is motivating to see ITU making all these efforts that aim to achieve an equal and gender-balanced ICT world.

I have never regretted this choice. Computer Science has opened many doors for me and, moreover; unlike the stereotype of “computer geeks,” I happily discovered that working in this field is often a team game, where you have to work and interact with other people. That’s one of the aspects I’ve enjoyed the most at work.

In the ICT world, women are in the minority.

The lack of female role models deters many young girls from even considering a career in this area. Events like the Girls in ICT Day are truly encouraging women to pursue a career in ICT.

Despite the gender imbalance in this sector, meeting successful women who enjoy working with technology and who have found interesting jobs all over the world thanks to their knowledge and expertise in ICT is the best way to show that ICT is also an opportunity for girls.

At CERN, we also acknowledge the need to break down stereotypes and bring science and technology closer to young students.

The Women in Technology Network at CERN, together with the CERN Diversity Office and the Local Engagement Office, participates in events every year to promote female role models in local schools.

CERN organizes programming workshops like Django Girls, making the world of programming both approachable and exciting for young girls.

CERN is also contributing to local events and initiatives like Expanding your Horizons, where hundreds of girls can discover with hands-on workshops what STEM is all about.

It is motivating to see ITU making all these efforts that aim to achieve an equal and gender-balanced ICT world. I am very pleased to see CERN collaborating with ITU in this endeavor and happy to be an active part of it!

The original version of this article first appeared on the EQUALS platform.

Share via
My experience at Girls in ICT Day as a mentor and workshop facilitator
https://news.itu.int/my-experience-at-girls-in-ict-day-as-a-mentor-and-workshop-facilitator/
X
ICT skills development for today’s digital economy and knowledge society…ICT4SDGBy Dr. Cosmas L. Zavazava, Chief, Projects and Knowledge Management Department, BDT, ITU In today’s digital economy, the importance of information and…
Send this to a friend