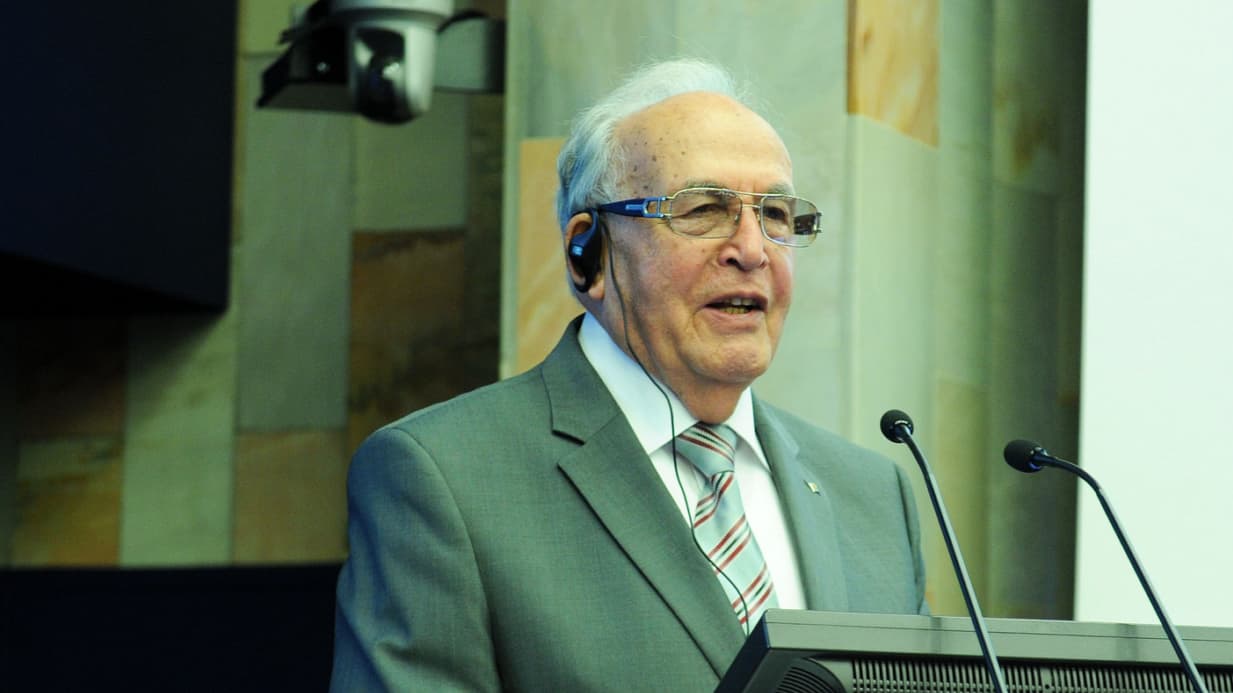 By Christoph Dosch and David Wood

​Mark Iosifovich Krivosheev, Doctor of Engineering, professor, well-known scientist and specialist in the field of TV broadcasting, scientific adviser of FSUE NIIR, passed away recently at the age of 96. He was much more than just a great ITU Chairperson, as two of his former ITU colleagues attest to below:

Throughout his long and fruitful professional career, Mark Krivosheev was a friend and mentor for many, including myself. He accomplished so much. In June 1972, he was nominated Chairman of CCIR Study Group 11 (Television Broadcasting), as the successor to Eric Espin. He remained the Chairman of SG 11 for 28 years, until 78 years young.

One of his first actions as Chair was the launching of studies in digital television. Discussions over the next decade led to the landmark ITU Recommendation BT. 601 in 1981. This marked the beginning of the age of digital television for the world. The 1960s had seen the fragmentation of the world into many analogue colour televisions standards, based on variants of PAL, SECAM, and NTSC.

How much had this cost the industry and the common man? Could this be replaced by a single common worldwide standard for digital television? This was the golden achievement of BT 601. The ITU was among the bodies receiving an Emmy award for this.

The story of HDTV began a few years later, with considerable international tensions between the parts of the world where 50Hz electricity supply and those where 60Hz supply reigned supreme. To soothe tensions, Prof Krivosheev developed the idea of an ITU ‘preliminary draft new recommendation’ which showed his mastery of the politics of the possible, which is, after all, what the ITU is all about. Finally, a draft Recommendation for HDTV, BT 709, was completed and agreed, and this triggered the age of HDTV.

BT 601 and BT 709 are just two of the ITU highlights influenced by Mark Krivosheev. All in all, more than 150 Recommendations were agreed under his leadership – too many to list.

After his term as Chair in 2000, he continued to work actively in the ITU for many years. He would always be there, analysing the media landscape and proposing directions for the ITU. He encouraged the ITU-R to enter the ‘Information Society’, and look for future convergence between broadcasting and Internet. In his 80s, he was writing and preparing a report about the ITU’s role in ‘Video Information Systems’, looking forward to a world widely populated with large video screens for advertising and information. Today, we are almost there. His last initiative was to elaborate the importance of broadcasting for the digital socio-economic society. 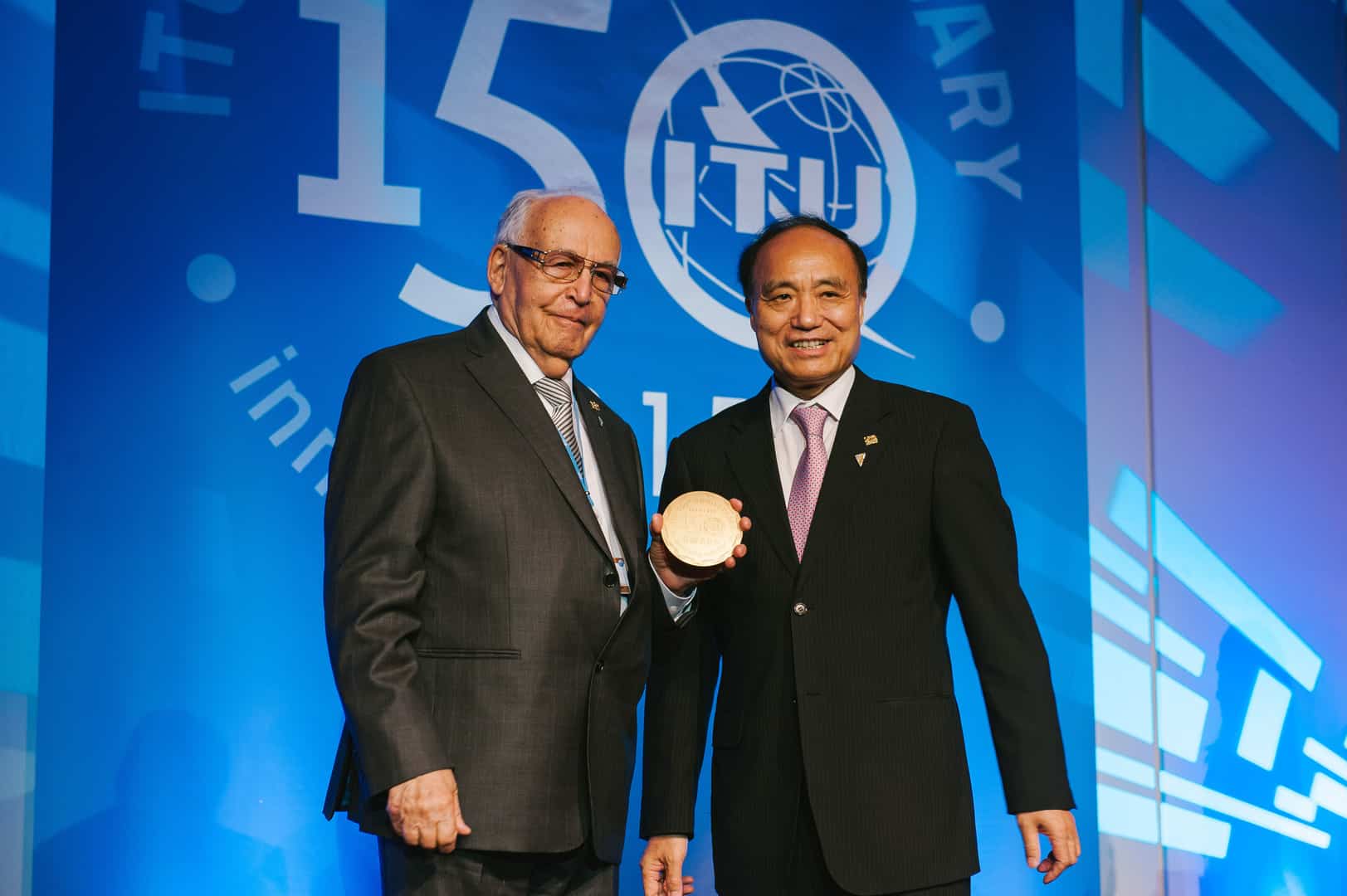 ITU Secretary-General Houlin Zhao presented a medal of recognition to Mark Krivosheev during the 150th Anniversary of ITU’s founding in Geneva, 2015.

In 2007, the author of this part was elected Chair of ITU-R Study Group 6 (the merger of CCIR SG 10 and 11) for – in total – an 8-year term. It was a turbulent period with many tough technical and political problems. Prof Krivosheev served as a wise mentor to me and the participants of SG 6. With his help and guidance, I “survived” this period.

“We produced many critical results for the world, including the Recommendation for Ultra High Definition Television. He was always on hand, eager to share the wisdom that his many years in the ITU had brought.”– Christoph Dosch

Just a few weeks before he died, we were actively discussing by telephone what the forthcoming ITU meeting would bring. At the age of 96, he was working on yet another book on broadcasting issues. He was simply unstoppable, right up until the end. He died in a Moscow hospital in the night from 15 to 16 October 2018.

I first met ‘Krivo’ in autumn 1981. He was then Chair of the CCIR Study Group 11, responsible for television broadcasting standards. This was the predecessor to today’s ITU-R Study Group 6. His fame went before him. He was, among many achievements, the man who launched 625-line monochrome television in the USSR and onto the world. He asked me to chair the drafting group that prepared the landmark Recommendation BT 601, the birth of digital television.

We worked closely together for the next 20 years. Never a day went by after that when he did not have a new idea for a television system or an ITU procedure. He led the charge on many of the most important standards in television, and received many awards and accolades.

“He was a man of many parts, great intellect, and an amazingly strong personality. He would always be listened to and respected. He was the personification of CCIR Study Group 11, and all that is and was best in it.”– David Wood

It would not be true to say that my ideas started out the same as his on critical matters. In reality, like many others, I listened to his opinions and ideas, and found them so reasonable and well founded, that I took them for my own. His vision for the CCIR Study Group 11 (and after its name change ITU-R Study Group 6) was a noble one. He told us where the mountain peaks were, and encouraged us to climb towards them.

As a first mountain peak, he took every chance he could to extol what he termed a ‘global approach’ – the ideal that the ITU should always seek technical standards that can be common throughout the world, rather than cataloguing national or regional standards. Sometimes, this was achieved, and sometimes not, but he was always there pushing us up the slope.

As a second mountain peak, he urged all contributors not to come to ITU meetings with ‘a fixed position in their pocket’. Getting agreement on common standards always calls for compromise, and for this to be achieved, delegates need to be allowed to compromise by their bosses back home. Once more he pushed and pulled for this whenever he could.

Another mountain top was his belief that the ITU should be mainly about agreeing Recommendations for common specifications. He thought that ITU Reports could be interesting and valuable, but the real job should always be preparing Recommendations. These were of the greatest value to the world. In approach, modern management theory would say that he was ‘results oriented’ rather than ‘process oriented’. We should, he always argued, never let ITU procedures slow down the path to Recommendations.

All of these are relevant today.

One other part of Krivo was his humanity. He remembered birthdays, always gave gifts, and encouraged us to take up a healthy lifestyle. I was particularly moved by something he said when his wife, a surgeon in Moscow, died. He told me that the one thing he regretted in his life was that he had spent his life buried in work (which we all knew to be true) and had not spent enough time with his dear wife. None of us, including the finest, can turn the clock back, can we? We should remember that, as well as his other lessons.

From the BR homepage and SG6 website about Professor Krivosheev:

‘The ITU-R Community is mourning Professor Mark Krivosheev, Chief Scientist at the Radio Research and Development Institute (NIIR), Moscow, Russian Federation and Honorary Chairman of ITU Radiocommunication Sector (ITU-R) Study Group 6 (Broadcasting service). Mr Krivosheev was honoured by ITU on many occasions throughout his illustrious career as a pioneer of technical development of digital television. He was an icon of our Sector.’

Share via
More than a great ITU Chairperson - Memories of Mark Krivosheev
https://news.itu.int/more-than-a-great-itu-chairperson-memories-mark-krivosheev/
X
Looking into the future of digital television and Ultra High Definition TV…Digital TVBy ITU News World Television Day is celebrated around the globe on November 21 and it is recognized as a key tool for informing the public on the impo…
Send this to a friend