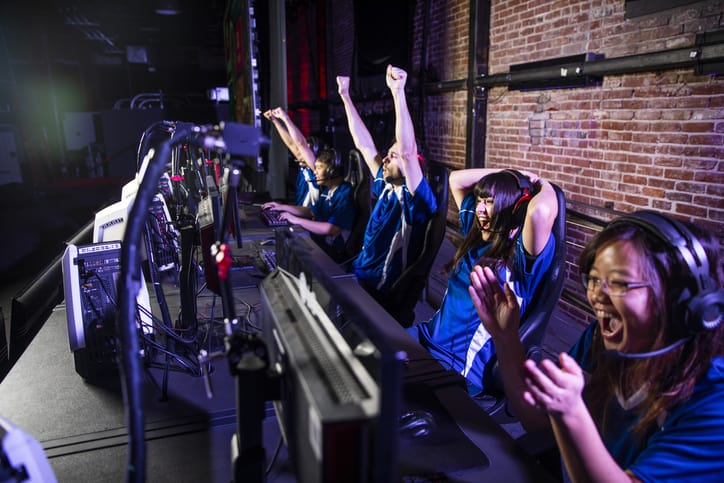 Leveling up the power and potential of esports for good

With a global audience of 450 million, annual growth rates of 20 per cent and revenues exceeding 1 billion USD per year, esports is among the fastest growing industries in the world. It also an exciting opportunity area to explore technology for good, with improved connectivity opening new professional and pedagogic pathways while enhancing online experiences for many.

Assistive technologies that help people with disabilities to compete as professional athletes is just one of many examples that were discussed in the latest edition of the recently launched Global Dialogue on Esports: Connecting the world and building a more inclusive future, hosted by the AI for Good Global Summit.

Defined as organized, competitive video gaming, esports are not restricted to any one age group, gender or part of the world. With the Global Esports Federation (GEF) now boasting 52 member countries, esports has become a truly international phenomenon.

Participants joining the Global Dialogue remotely hailed from Greece to Singapore, Montenegro to Iceland. This burgeoning space may seem cutting edge to some, but Korea’s national esports body was founded 22 years ago, noted Chester King, GEF Board Member and CEO of the British Esports Association.

From the lone gamer stigma to digital inclusion by definition

Panellists acknowledged that a cultural stigma persists in many places around the world, where esports are often dismissed as “mere gaming,” noted moderator LJ Rich, presenter of BBC’s flagship technology show “Click.”

To counter this narrative, organisations like the Global Esports Federation are trying to “transition that stigma from what people typically think of as a gamer, someone in their parents’ basement, eating snacks and drinking a lot of caffeine, versus what a really great gamer can be,” said Dr. Melita Moore of the GEF’s Athletes & Players Commission.

Panellists agreed that esports has really become accessible to all five universities in the UK offering esports degrees, from production to esports marketing or business development, he noted. Slowly but surely, King said, these pathways are “empowering individuals do create their own esports business.” Schobbers agreed, pointing out how new study programmes and innovative online formats in The Netherlands are making it easier to study esports, even for those who are not enrolled in formal education.

Even if you can’t attend a traditional school, people of all shapes, sizes and backgrounds can probably participate in some kind of esport, pointed out Mr. King. Thanks to adaptive gaming, those with disabilities or paralysis, or without limbs can even use their mouth to participate, including at a professional level, added Koen Schobbers, GEF Vice Chair and professional esports athlete.

Esports is reaching older populations as well. “When the [Nintendo] Wii game first game out, we used it in our rehabilitation hospital for patients recovering from stroke, brain injuries,” highlighted Dr. Moore. Even though it wasn’t called esports 10-12 years ago, video games were already helping people improve physical abilities like balance and coordination, she said.

The conversation then turned to cyberbullying, with all panellists acknowledging it as a major problem in gaming. “Some women gamers disguise their voice as a young boy to avoid getting bullied,” noted Moore. Diversity should be a number one priority: elevate, empower and engage more women in gaming, she said.

Panellists agreed on the need to get more women involved, with King noting the GEF’s recent setup of a dedicated Women in esports Committee.

“In national schools’ esports tournaments in the UK, we have a code of conduct – with yellow card and red card, just like on a traditional football pitch,” said King, highlighting a zero tolerance for toxicity message that the Global Esports Federation aims to “instil in a new generation.” Ms. Rich added that teams building and making games could also be more diverse to appear to a wider audience.

Powered by the full gamut of ICTs

Without ICTs, of course, esports could not exist.

Indeed, esports are not just played on consoles – you can play on a personal computer, or even on a mobile phone or tablet. Popular devices vary by country. In India, for example, you hardly see any PC or console games, and it’s more about mobile gaming, noted King. The country is also embracing esports education, he said.

According to Schobbers, “cloud gaming is becoming a thing as well – and works brilliantly in the Netherlands because we have very fast internet connections.” He expressed a hope that cloud gaming could encourage more casual players, especially in countries that struggle with ICT infrastructure. It a big opportunity area to scout esport talent, he said.

Bridging the digital divide is essential in making esports even more inclusive, noted King, pointing out lag times, ping rates, and latency as matters of crucial importance. Aspiring esports athletes will never win against someone in a different country with less lag time, he said. “We need to work hand-in-hand with game publishers to invest in infrastructure in order to level the playing field,” he said.

Even when building your athletic career in the digital world, good health is paramount (physical, mental, emotional…) and strongly connected to SDG3 on Good health and well-being,” noted Dr. Moore. “I treat my [esports] athletes exactly the same way that I treat my traditional professional athletes,” she said.

Moderator LJ Rich noted how the physical and mental health effects of lockdown do not only negatively affect traditional athletes, but everyone. In the midst of the pandemic, all of us are looking at screens more than ever, Moore said, pointing out how, according to the World Health Organization, 52% of people will become nearsighted in the next 10 to 15 years. “Whether you are a pro gamer or not, try the 20/20/20 rule around vision health,” she suggested. “Every 20 minutes, look 20 feet away from the screen for 20 seconds.” Moore also referred to studies showing how 20 minutes of daily physical activity can help enhance esport athlete performance.

King highlighted how esports can have mental health benefits, pointing out how the Royal Air Force in the UK is using them to combat loneliness. “It can improve cognitive development, memory function and make you happy, which is pretty important,” he said.

Schobbers added the importance of educating educators in the 5S system: sleep, study, sports, social life, and screens. “The S of screens is not allowed to have any negative effect on the other S’s,” he said.

Building awareness on what esports is, as well as what the community and industry is like, is an important first step in helping decision-makers to open up to more possibilities. Financially support governments in building career and education pathways into esports could be an innovative way to further advance digital inclusion.

“Funding is a huge opportunity to decrease digital divides,” said Moore. Members could invest in the non-profit work of organizations educating youth on the important of healthy balance in gaming, she suggested. The dynamic world of esports is already connecting people of all ages and helping to build a more inclusive world – it’s time to level up that potential.

X
Beyond contact tracing: How new e-health tools are being deployed to fight COVID-19…Artificial IntelligenceBy ITU News When most people think of pandemic-related technologies, their minds turn to contact tracing applications powered by AI algorithms that ma…

Leveling up the power and potential of esports for good

Share via
Leveling up the power and potential of esports for good
https://news.itu.int/leveling-up-the-power-and-potential-of-esports-for-good/
X
Amid COVID-19, let’s not forget climate change. Earth School can help.…Emerging TrendsBy Malcolm Johnson, ITU Deputy Secretary-General The world continues to reel from the immediate challenges posed by the global COVID-19 pandemic. As t…
Send this to a friend