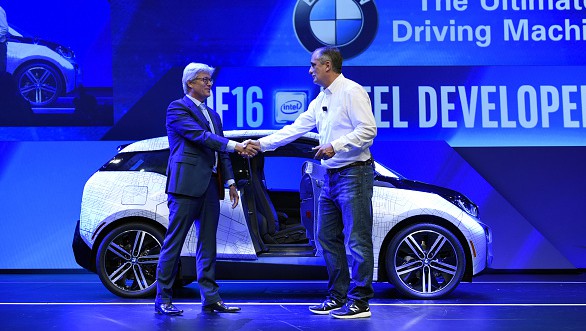 Intel has unveiled its latest Advanced Vehicle Lab, this one based in Silicon Valley, as it ramps up its commitment to research and develop autonomous cars and the future of transportation. The lab joins Intel’s other dedicated vehicle facilities in Arizona, Germany and Oregon. They have been created to explore and better understand the various requirements related to self-driving vehicles and transportation, including sensing, in-vehicle computing, artificial intelligence, connectivity, and supporting cloud technologies and services.

Intel expects autonomous vehicles to generate approximately 4 terabytes of data every 90 minutes of operation (the average time for a daily return commute in the US, apparently) via camera, LIDAR, RADAR and other sensors. Whilst most of this data will be processed, filtered, and analysed in the car, the most valuable data will be moved to the data centre for processing and to update maps and enhance data models. That is a colossal amount of data, which explains Intel’s strategic commitment to the emerging industry.

“I have unwavering confidence that Intel will succeed in autonomous driving,” said Doug Davis, SVP and GM of the Automated Driving Group (ADG) at Intel. “We have an astounding breadth and depth of experience and the world’s finest technology toolkit to apply to this challenge. We have tapped resources from across the company and have added experienced talent from the automotive industry. Our teams are operating in high gear and will deliver the necessary technology breakthroughs.”

Davis says that they are also prepared for the data challenge – how best to process it, manage it, move it, store it, share it and learn from it. To that end, Intel has installed the first of several planned data centres dedicated to autonomous driving. These labs will be used for algorithm development and training, as well as for understanding the special infrastructure needs for autonomous driving data movement and storage. The idea is to then train neural networks and improve machine learning algorithms.

“When cars are thinking and acting without human intervention, they must be able to do so in a safe and trustworthy way,” said Davis.

“The artificial intelligence needed to make this happen isn’t just computer vision – think voice, decision-making, personalisation and preferences. Each of those AI workloads needs a different set of algorithms and likely different kind of processing for optimum performance.”

Davis says that Intel technology is in hundreds of autonomous test vehicles on the roads today, although manufacturers are often coy about revealing whose equipment they are using. At the opening of the new lab this week, Intel unveiled the first of about 40 highly automated driving (HAD) cars promised from BMW, Intel and Mobileye this year, in preparation for planned commercial production by 2021.

“Autonomous driving will accelerate when the industry comes together to align on common platforms and technologies,” said Davis. “That enables developers to go quickly and in volume while still differentiating their solutions in software. The faster we can deliver autonomous driving technology and take humans out of the driver’s seat, the faster we can save lives. It’s that simple – and that important.”

Share via
Intel shifts into top gear with autonomous driving and AI goals
https://news.itu.int/intel-shifts-into-top-gear-with-autonomous-driving-and-ai-goals/
X
New ITU work stream to develop security standards for connected cars…Connected CarBy ITU News ITU has established a new work stream to coordinate the development of security standards for intelligent transport systems (ITS). ITS and…
Send this to a friend