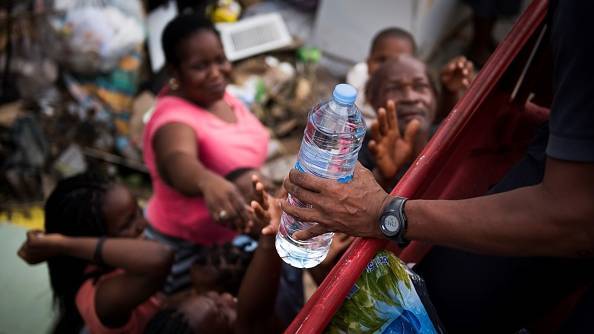 In one of the most powerful storms on record, Hurricane Irma has destroyed critical infrastructure in many parts of the Caribbean and southern United States, leaving scores dead and thousands homeless.

Now more than ever – as rescue and support crews scramble to provide food, shelter, safety and medical supplies – the deployment of emergency telecommunications equipment is critical to coordinate these efforts. And ITU is stepping in to help meet the urgent needs.

ITU staff are now helping to deploy critical equipment to countries hit by the hurricane after ITU sent some 70 satellite phones from Iridium Satellite Communications and 10 broadband satellite terminals from Inmarsat to the region.

Satellite phones can operate without functioning cell towers, and in some of the hardest-hit countries, such as Barbuda, critical telecommunications infrastructure has been severely crippled, with estimates that over 95% of structures on the island sustained damage. The broadband satellite terminals are portable and can connect a laptop computer to broadband Internet in the affected areas.

The vital role of telecoms in emergencies

Emergency telecommunications play a critical role in the immediate aftermath of disasters by ensuring the timely flow of vital information which is needed by government agencies, and other humanitarian organizations that are involved in rescue operations.

“The equipment will provide vital links to coordinate relief and rescue efforts.” — Dr. Cosmas Zavazava, Chief of Projects and Knowledge Management at ITU-D.

“ITU has deployed emergency satellite terminals to enhance the response effort for the Caribbean countries affected by the devastation caused by Hurricane Irma. The equipment will provide vital links to coordinate relief and rescue efforts,” says Dr. Cosmas Zavazava, Chief of Department, Projects and Knowledge Management at ITU. “At the same time, ITU considers emergency telecommunications as a lynchpin to the successful implementation of the United Nations’ Sustainable Development Goals.”

RELATED: How messaging apps are changing the way people respond to humanitarian crises

ITU is committed to ongoing support during emergencies. Over the past years, ITU has deployed emergency telecommunications to almost all the regions of the world.

A global network to help

ITU is part of the Informal Working Group on Targets and Indicators that formulated a set of seven global targets, which were adopted as an integral part of the Sendai Framework adopted by the Third United Nations Disaster Risk Reduction Conference that was held in Sendai, Japan in 2015.

ITU is also part of the Emergency Telecommunications Cluster (ETC), a global network of organizations that work together to provide shared communications services in humanitarian emergencies.

X
5G: Prepare for the future with high performance and flexibility…5GBy Jan Färjh The original version of this article first appeared in ITU Telecom World. Looking back a few decades and focusing on the previous generat…

Share via
Hurricane Irma: ITU sends emergency telecoms equipment to the Caribbean
https://news.itu.int/hurricane-irma-emergency-telecoms/
X
My meeting with the Pope: Houlin ZhaoICT4SDGBy Houlin Zhao, ITU Secretary-General On 1 September 2017, I met His Holiness Pope Francis in his office. He warmly welcomed me and expressed his supp…
Send this to a friend