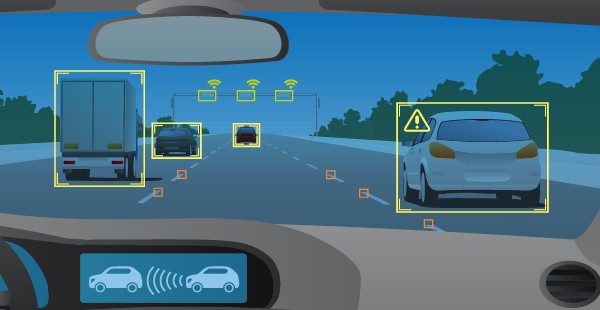 Artificial Intelligence (AI)-based equipment will increasingly become standard in both infotainment and in advanced driver assisted systems (ADAS) and autonomous vehicle applications, according to a recent Automotive Electronics Roadmap Report from IHS.

The report indicates that “…unit shipments of artificial intelligence (AI) systems used in infotainment and ADAS systems are expected to rise from just seven million in 2015 to 122 million by 2025.” It explains that the attach rate of AI-based systems in new vehicles was a mere 8% in 2015, but is set to rise to 109% in 2025, as multiple AI systems are routinely installed.

The use of AI in cars has important implications for building Smart Sustainable Cities. As city leaders aim to streamline transportation, they are studying how AI-equipped vehicles can help to increase road safety, reduce commuting time, eliminate traffic bottlenecks, and lessen reliance on parking spaces – among other applications.

Equipped with a combination of intelligent software and sensors, an AI-equipped vehicle knows where it is, what is around it and where other moving objects –  such as vehicles, pedestrians, cyclists, and animals – are.

“An artificial-intelligence system continuously learns from experience and by its ability to discern and recognize its surroundings,” according to Luca De Ambroggi, IHS Principal Analyst of automotive semiconductors. “It learns, as human beings do, from real sounds, images and other sensory inputs. The system recognizes the car’s environment and evaluates the contextual implications for the moving car.”

In addition to these technologies, fuel and infrastructure advances will play a big role in future, and all of the elements will converge to push, pull and cajole transportation into existence within the truly Smart Sustainable City.

Vehicles will become a key segment of the energy and social infrastructure of the cities of the future.

Car sharing on the uptake

What’s interesting is that when you dig deeply into future plans, vehicle use may very well be unrecognizable compared with today’s a-car-in-every-driveway model. Instead, car sharing will likely take hold.

According to ABI Research the global number of car sharing users will reach 650 million by 2030.

Before we hand over the car keys, however, AI will need to become more widespread and the number and types of applications will need to grow.

Along the way, other AI-based technologies to watch for include drones, wearables and smart devices that will communicate with each other and vehicles. Self-driving cars will likely replace their predecessors.

Embedding AI isn’t there yet though, nor is the ability to mass-produce the required technologies for a reasonable price tag. Each year’s models, however, do see greater AI implementation, and there’s no sign that the trend will slow.

Share via
How can AI-powered cars help make cities smarter?
https://news.itu.int/how-can-ai-powered-cars-help-make-cities-smarter/
X
Will Orange’s PayJoy investment help overcome the connectivity price barri…Digital FinanceBy Lucy SpencerThe high price of smartphones often locks those living on the lowest incomes out of today’s digital economy, though they arguably have …
Send this to a friend