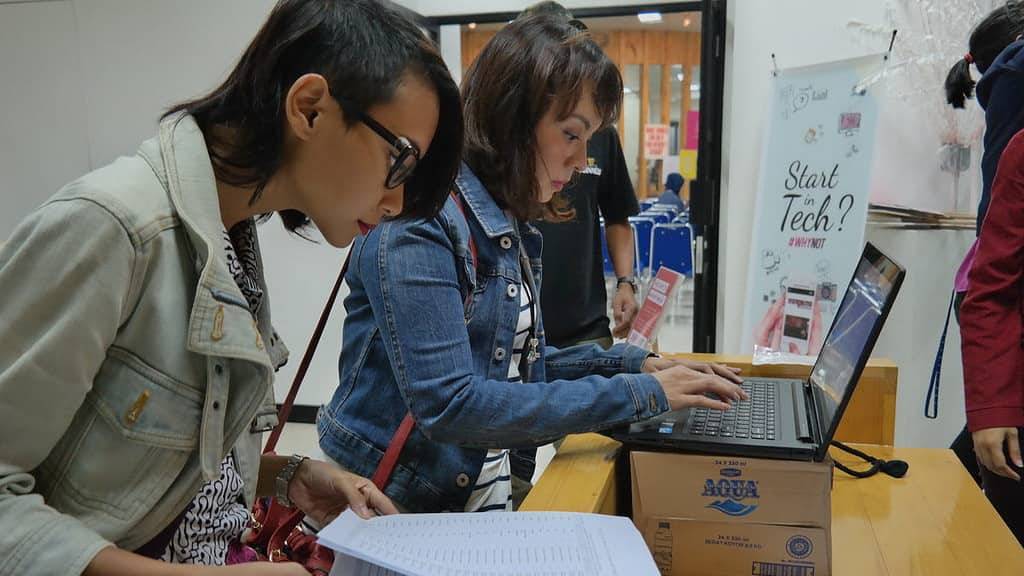 GEM-TECH Awards 2016 finalist, Girls in Tech, tells us how they are engaging women in the ICT sector in Indonesia by asking, #whynot. This year’s GEM-TECH Award winners will be announced on 15 November 2016.

My journey began when I said “Why Not?!” to rejection I faced when I tried to publish my book and start building my own self-publishing platform NulisBuku.com. Now, NulisBuku.com has more than 6,000 books from more than 150,000 writers in its community – it’s possible to create your own way and lead the way for others.

In Indonesia, technology is perceived as ‘difficult’ for women and it has shied women away from entering this subject.

As we know, technology has massive potential to solve problems in society – and Indonesia, as a country of more than 250 million people, of which 100 million are under 35 years old and 50 million are young women, should use this asset and start to inspire women to use technology as catalyst for their success.

We need balance in the technology sector. Women have traits that are highly needed for the growth of a company, specifically in technology, but a lack of interest and fear of starting to get to know technology can be a big barrier to increasing the number of girls in technology in Indonesia. Girls in Tech Indonesia understands this issue and would like to raise awareness about the subject while giving immediate action plans for girls to start seeing technology as a fun and exciting thing to explore.

Girls in Tech Indonesia initiated the #WhyNot campaign to help women raise the most important question that could help them enter the technology world with confidence.

Through a mentoring session, we matched 15 girls with five top female CEOs in technology, including the Head of Facebook Indonesia, Sri Widowati. It was an inspiring experience for them to be able to ask questions and connect directly with successful women in technology.

After each meetup, workshop and mentoring session, we put #WhyNot participants in separate groups which allowed them to communicate and inspire each other with their projects. We believe that #WhyNot is a question that must be asked on daily basis, challenging us to be better people.

Anantya, my partner at Girls in Tech Indonesia, said #WhyNot when she started building her digital agency while doing her Masters degree at the age of 25.

Putry, one of Girls in Tech Indonesia mentees, said #WhyNot when she created Kostoom.com, a marketplace to connect tailors with their prospective customers easily after she saw that a lot of good tailors couldn’t get orders simply because they couldn’t be accessed easily.

When thinking about the multiple roles that women have, Annisa the founder of idstudentjob.com, a job listing for students, decided that having children shouldn’t stop her from becoming productive and growing her startup. She just gave birth and still dedicates time for her startup, while breastfeeding her baby.

#WhyNot is more than a campaign. It’s a principle. It’s life values. We hope that all the girls joining our meetups, workshops and mentoring sessions will be able to continue to say “Why Not?” and spread the #WhyNot spirit to their community.

Start in tech? Why Not!
Aulia (Ollie) Halimatussadiah
Ollie (@salsabeela) is the co-MD of Girls in Tech Indonesia. Together with Anantya, she’s been building Girls in Tech Indonesia since 2011 to encourage more women to use technology to improve lives. She’s also the Co-Founder and Chief Content Officer of Zetta Media Network. Zetta Media is a digital media network, focusing on building inspiring portals with authentic and viral content for the youth in Indonesia.

Share via
Girls in Tech Indonesia asks: \'#WhyNot?\'
https://news.itu.int/girls-in-tech-indonesia-asks-whynot/
X
How to bridge the digital divide: Datawind CEO (VIDEO)…Emerging TrendsAffordability remains a key barrier to connecting the next billion to the Internet and bridging the digital divide. By providing a complete solution t…
Send this to a friend