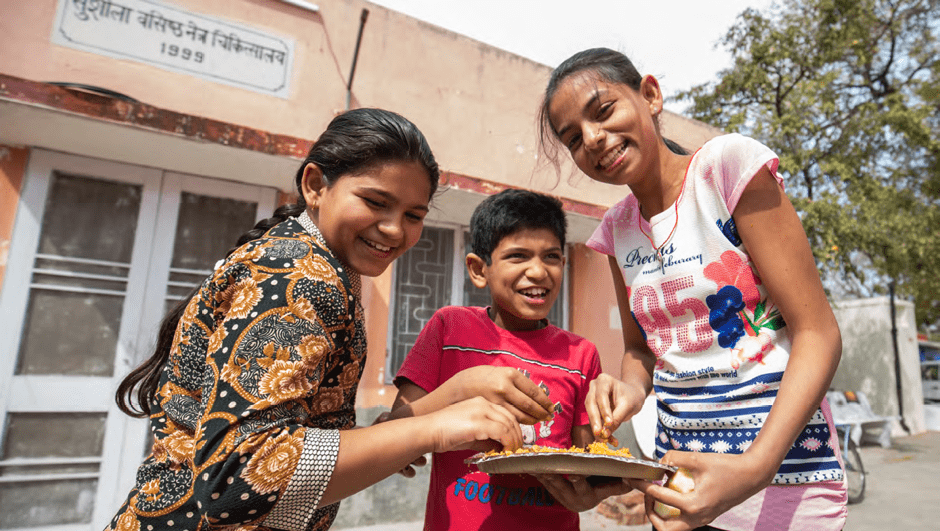 Food for all: how mobile technology can combat hunger

Globally, 1 in 9 people go hungry every day, according to the World Food Programme. That’s nearly 800 million people. And yet, some 1.3 billion tonnes of food are wasted every year.

To combat this problem — and to make progress on the United Nations’ Sustainable Development Goal No. 2 “Zero Hunger” — information and communication technologies (ICTs) are now increasingly being deployed to better connect the hungry to excess food at a scale and speed never before possible.

As part of a growing global trend from San Francisco to Paris to New Delhi, social entrepreneurs are harnessing the power of mobile technology to feed the hungry.

No Food Waste is a prime example. The social start-up aims to address urban hunger in India with a simple concept: take excess food from wedding parties, parties, restaurants and colleges, and redistribute it to those in need and at risk of hunger — the homeless, poor, and the elderly.

“We want to reduce the hunger and people dying from hunger. So that’s why we created the app,” says Guna Sekaran, Director of No Food Waste’s Delhi chapter.

“Nowadays, everyone is using mobile phones, so through the phones, we create awareness.” – Guna Sekaran

Donors input information on the No Food Waste mobile app, such as location and amount of food, which is then picked up by a local volunteer and delivered to a local hunger spot.

Currently available in eight cities across the country, the platform, as of 31 May this year, has helped to feed 285 383 people across the country since launching in 2016 according to official No Food Waste statistics. 10 000 meals have been provided in the Delhi area alone, says Sekaran.

“The organization’s dream is that no person should remain hungry, that people should get proper, nourishing food,” Sangeetha Singh, Director of No Food Waste’s Noida chapter, said. “We want to create an awareness that instead of wasting, you can give to beggars and the underprivileged.”

On the road with No Food Waste

On a bright day in March, ITU News met with Satish Anburaj who has helped feed 50 people a week with surplus food from his South Indian restaurant, Sri Balaji, in central New Delhi, since 2016.

“Loads of food had been wasted by the team. So I decided to join with the No Waste Food organization. In India, lots of people are under the poverty line, and we like to help,” he explains. “I like to provide them food because they are also human beings. I like to be a chef because I like that people eat my food. It feels really good that people are eating my food.”

Without the ability to refrigerate and store the donations, the food donated to No Food Waste can’t travel far in Delhi’s heat. With time an important consideration, the No Food Waste team has generated a map of local “hunger spots”, such as orphanages, shelter homes, slums, and hospitals.

With a spicy aroma of fresh food floating through the minivan, Sekaran used the mapping tool to identify an Ashram in central Delhi where elderly residents eagerly awaited their meal. Upon arrival, they welcomed the delivery with big smiles before tucking in to the food.

“We have a very happy life,” said one resident between mouthfuls of spicy rice.

“When we are giving the food to some people they are very excited and we are really excited for them,” said Vijay, a No Food Waste volunteer who helped with the delivery.

Other food start-ups around the world are using mobile technology to help to solve food insecurity.

Over 12 million meals have been redistributed in Ireland and the UK through FoodCloud, a company that connects charities to supermarkets with unsold food.

Copia has completed over 3200 food pickups in San Francisco, USA, through its mobile app, and recently redistributed excess food from the 2017 Oscars.

Meanwhile, in West Africa, poor road conditions and refrigeration can often mean that food spoils before it can get to market. Cheetah allows farmers, food transporters and traders to share value chain information, such as the fastest route to market, and is currently being tested in Ghana.

[For more on-the-ground examples of how ICTs are accelerating the SDGs, read the latest edition of ITU News Magazine.]

Food for all: how mobile technology can combat hunger

Share via
Food for all: how mobile technology can combat hunger
https://news.itu.int/food-for-all-how-mobile-technology-can-combat-hunger/
X
Singapore’s Lab on Wheels makes tech funICT4SDGBy ITU News Sitting in pairs in an air-conditioned bus, young students giggle as a mini robot they programmed slides across a small table, changing it…
Send this to a friend