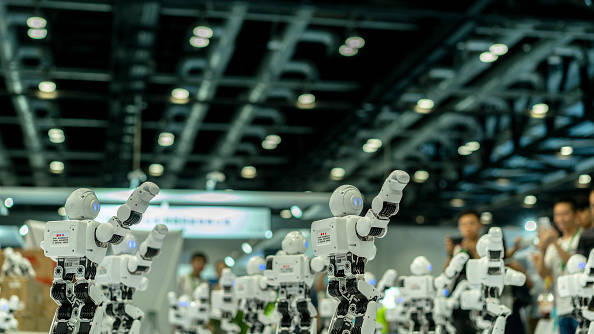 China, world leader in AI? Why it may happen sooner than you think.

The next global technological race is said to be on artificial intelligence (AI) – a technology widely recognized as one of the most important advancements of our time. It is easy to fall into the stereotype that the AI revolution is driven by the leading tech companies in the West, but many experts believe Chinese companies’ AI capabilities are hardly far behind.

Moving forward, China’s research talent depth, enormous Internet industry and massive data pools all position the Middle Kingdom to sharpen its competitive edge. AI is also a new focus for venture capital (VC) investments in China after a record high in 2016, according to KPMG.

The government’s recently demonstrated determination to support China’s growth in AI, will also help fuel success. China is embracing the cutting-edge technology and has already invested heavily in projects, start-ups and academic research in AI.

“The government has shown a lot of interest and support in this field,” said Prof. Xiaoyan Zhu, Professor at the Department of Computer Science and Technology at China’s prestigious Tsinghua University and the Head of the State Key Laboratory of Intelligent Technology and Systems in an interview with ITU News. “AI is being officially listed in government strategic plans for technology. I’ve noticed, in the past year, the government has expressed strong interest in AI research and is proactively working with academia.”

China’s trio of internet giants – Baidu, Alibaba and Tencent (B.A.T.) – also known as the Google, Amazon and Facebook of China, have all set up research labs focusing on AI’s applications in areas such as transportation, healthcare and speech recognition.

Baidu, which earlier this year appointed former Microsoft executive and AI expert Qi Lu as its chief operating officer, has recently launched its autonomous driving project, Apollo, aiming to the develop safer and more reliable self-driving vehicles. The World Health Organization (WHO) estimates more than 260,000 people die annually as a result of traffic accidents in China; the number could be drastically reduced with the adoption of autonomous driving technology. The company is open-sourcing Apollo, making code and data free and available for anyone – including China’s young auto manufacturers.

Another area that AI is poised to revolutionize is healthcare. The Chinese e-commerce giant, Alibaba, recently announced its ambition to reform healthcare by launching ET Medical Brain on Alibaba Cloud. The country is facing a shortage of workers in healthcare with only 1.5 physicians for every 1,000 people according to WHO. The technology aims to alleviate the workload of medical personnel by providing virtual assistance to patients and support in technical areas such as medical imaging and drug development.

Tencent, best known for its social messaging platform, WeChat, has also launched an AI lab focusing on areas such as speech recognition and natural language processing. The company’s speech recognition technology has already been recognized in many international competitions.

So, what is China’s edge?

Being the most populous country in the world, China is sitting on a data goldmine.

Prof. Zhu, whose research focuses on a range of topics including text mining and human-computer interaction through conversation and dialogue, explains that China’s advantage is its people, which gives the country the advantage of having a massive user base to generate data.

The development of AI is also fueled by the country’s enormous Internet industry and up-and-coming IT companies eager to adopt AI technologies and automation.

Moreover, the country has the talent pool to serve the burgeoning AI market.

“AI is considered more of an ‘applied science,’ ” Zhu told ITU News. “Chinese students perform well at subjects like mathematics and science. We don’t have a shortage of young talented students in that sense.”

“It is a double-edge sword. On one hand, AI will contribute to productivity growth and offset China’s shrinking workforce. On the other hand, a lot of job opportunities will be replaced by automation.” – Prof. Xiaoyan Zhu, Tsinghua University

Large IT companies have also been instrumental in training and fostering young talent.

“China’s B.A.T. and other large IT companies offer training programs and opportunities, and they attract a lot of aspiring AI specialists, computer scientists and engineers,” says Zhu.

The widespread emergence of AI will disrupt not only the Chinese economy but the global economy. Automating workplaces could potentially add 0.8 to 1.4 % to GDP growth annually, according to a newly released discussion paper by McKinsey. The technology will play an increasingly important role in sustaining the country’s economic growth as its workforce shrinks – by a record 4.87 million in 2015 according to National Bureau of Statistics.

“It is a double-edge sword. On one hand, AI will contribute to productivity growth and offset China’s shrinking workforce. On the other hand, a lot of job opportunities will be replaced by automation,” Zhu said. There will be a profound shift for millions of Chinese in the workforce.

According to McKinsey, China has the world’s largest automation potential, which half of all work activities could be automated. For example, the AI-enabled facial recognition technology is already in use for authorising payments and providing access to facilities in China.

Despite the grim outlook envisaged by many, Zhu remains optimistic.

“I’d still like to believe that the economy will eventually adapt and find that balance,” she says. “It’s happened before with the Industrial Revolution and past technology-induced disruptions. There will be job losses, but most likely the disruptive technology will create new opportunities and industries.”

Does it mean that jobs that are less likely to be filled by robots – jobs that require creativity, emotional intelligence and social skills – will open up more opportunities in the future?

RELATED: Japan’s ‘Society 5.0’ will integrate cutting-edge tech at all levels

There is no doubt that AI and machine-learning will have far-reaching potential at many levels. But in order to maximize AI’s benefits, it is necessary to develop the right policy framework and address ethical and legal concerns. While looking into the future, it is important not to overlook the fundamentals.

“It is important to recognize AI as a tool to support, improve, and advance our society,” said Zhu, “but first, we need to have adequate infrastructure and systems in place. AI has very limited capability at places without broadband, for example.”

To put it another way, AI technologies have the potential to revolutionize the automotive industry from the design of the vehicle to the driving experience by realizing autonomous driving, but we need to develop a fully functioning vehicle to begin with.

China, world leader in AI? Why it may happen sooner than you think.

Share via
China, the next world leader in AI?
https://news.itu.int/china-world-leader-in-ai-why-it-may-happen-sooner-than-you-think/
X
Will Uber’s new women executives bring reform?Emerging TrendsBy ITU News HP Enterprise CEO Meg Whitman took to Twitter late Thursday to quell speculation that she would be the next CEO of the global riding-haili…
Send this to a friend