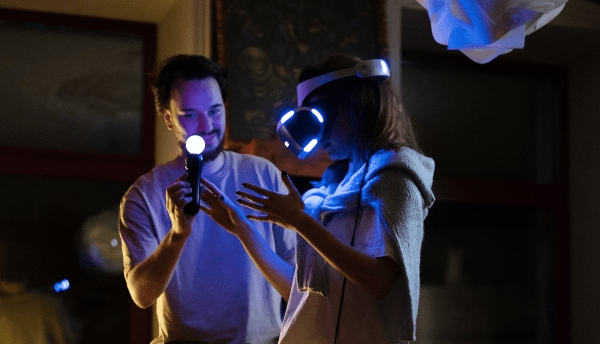 It’s no secret now that esports are taking over both real and virtual worlds with a global audience nearing half a billion spectators. And esports industry statistics are earth-shattering, with annual growth rates as high as 20 per cent and revenues exceeding 1 billion USD per year.

But what about the technology that makes the esports multiverse so compelling? This was the question explored by a recent AI for Good webinar as part of the Global Dialogue on Esports.

Featuring expert panellists hailing from Singapore, Toronto, Manchester and more, the diversity of speakers and attendees demonstrated how esports is truly a global phenomenon. The webinar, entitled AI for *REAL* good – real-time innovation, real-time applications for esports and beyond, was moderated by music artist and TV host LJ Rich, presenter of the BBC tech programme ‘Click.’

RELATED: Leveling up the power and potential of esports for good

As AI advances, make way for The Matrix

Rich noted the fact that it has been over 20 years since the iconic scene from the film The Matrix was shot, in which 120 cameras were set up to record in quick succession. This is the sort of innovation we now “take for granted in gaming now with 360-degree view,” she said.

According to Chong Geng Ng of the Singapore Esports Association, we are only barely scratching the surface when it comes to the potential of using volumetric capture. At the moment, he noted, expensive cameras and entire systems are required to create entirely virtual worlds. Eventually though, “AI will reduce the resource requirements needed to develop virtual environments,” he said.

For example, right now 12 sensors might be needed to record motion capture into a system, Ng said. “With AI, you may be able to do the same thing with only 5 sensors, or even a physical camera.” Ng imagines a near future in which everyone would be able to create their own virtual worlds and invite others to participate. “The Matrix is going to happen,” he declared, “and much sooner than we expect if we are able to make use of AI correctly.”

AI is already blurring the lines between the real and virtual; and between traditional sports and esports. Autonomous Drivers Alliance Founder Bryn Balcombe knows a thing or two about both shifts, as an ex-Formula One and now Roborace driver and Chief Strategy Officer. Roborace, a sports media business developing completely new forms of autonomous motorsport, also established ADA (Autonomous Drivers Alliance), a non-profit association focused on contributing to global action in the interests of road safety.

Roborace features fully autonomous driving powered by GPU technology that is advancing the esports generation, he said. Highlighting a strong focus on bridging the gap between the real and virtual worlds, Balcombe noted how “an esports gamer can race against a physical car, and the two things interact. We are seeing the convergence of entertainment, technology development and sports.”

Chris Overholt of OverActive Media shared another example of this convergence, where a virtual stadium was created during March Madness where fans with VR technology at home could “actually attend the Final Four.” He noted how the upcoming Olympic Games in Los Angeles will probably be “the last expression of the modern Olympic Games, as we have all understood it to be in our lifetime.” After that, Overholt expects a big leap forward, “creating the opportunity for millions more around the world to enjoy the Olympic experience live.” He went on to highlight how esports is not just a virtual experience – “a big part of our business model is that there will be a live experience” as well, he said.

Immersive experiences are not just for esports athletes, but for spectators too, said Ursula Romero, Managing Director of the International Sports Broadcasting (ISB). Immersion is especially important for younger generations who already experience immersive media through the devices they use daily, she pointed out.

More than just human versus machine

Reflecting on how far technology has come since Deep Blue – the IBM computer essentially containing the sum of all human knowledge at chess – defeated Garry Kasparov in 1997, Andy Miah from the University of Salford noted how “technology pushes us to think more carefully about what our contribution to the world can be and work in partnership with machines.”

When it comes to AI in esports, human-machine interaction is not going anywhere anytime soon. Miah went on to quote an esports player involved in a human vs. machine Starcraft competition: “Having been beaten by the computer, he said: ‘The computer demonstrated strategies I hadn’t thought of before, which means there may still be new ways of playing the game we haven’t fully explored.’” What is wonderful about that is how computer power can allow us to see the world differently,” Miah said. “And that is one of the biggest wins from this [human-machine] relationship.”

Miah also noted how “the gameplay of people in virtual worlds can affect decision-making in the physical world of sports as well.” He mentioned how AI innovation around esports is driving the advent of new health management systems that can be rolled out to wider populations. “Esports integration is a catalyst for a whole range of public health solutions that are desperately needed in places where there’s limited infrastructure,” he said.

Esports also helps us think about the “digital haves and digital have nots,” pointed out Balcombe. “Who has access to this technology? Creating a bigger digital divide is not what we need at the moment,” he said. “Sport is a great medium or lens to determine what is fair or not.” Miah noted how the Olympics is a relevant model for nations worldwide coming together despite very different economic means. “Esports is a way of developing skills that can leapfrog some of these limitations and find really remarkable solutions,” he said.

X
Why the new UN Disability Inclusion Strategy is an opportunity for ITU…Digital SkillsBy Catalina Devandas-Aguilar, UN Special Rapporteur on the rights of persons with disabilities *The following article is adapted from my opening remar…

Share via
How AI is democratizing innovation in esports and beyond
https://news.itu.int/ai-democratizing-innovation-esports-beyond/
X
Why we’re joining forces with ITU for affordable broadband…Big DataBy Sonia Jorge, Executive Director, Alliance for Affordable Internet (A4AI) We are delighted with the opportunity to join forces with ITU to help prov…
Send this to a friend