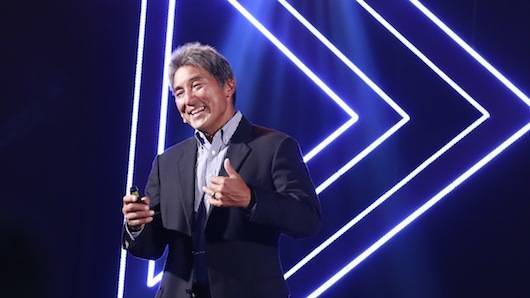 The Asian Carriers Conference (ACC2017) kicked off in Cebu, Philippines on Tuesday with a pep talk from Guy Kawasaki, Silicon Valley guru and chief evangelist for online graphic design platform Canva, who outlined key points that telcos should keep in mind as they plot their path to digital transformation.

Drawing from his own experience working for Apple – a company that has undergone a number of transformations and reinventions itself – Kawasaki shared ten key lessons from Apple that telcos can draw upon to transform their businesses and mindsets, provide a better customer experience and become disruptors in their own right.

1. Don’t ask the customers what they want

For all the emphasis on being customer-centric, if telcos want to be disruptors, they won’t do that by asking customers what they want, because customers won’t ask for something disruptive – they’ll ask for changes based on what they already know about your product or service.

For example, Kawasaki said, if Apple had asked Apple II customers what they wanted, the answer wouldn’t have been the MacIntosh (Apple II’s successor), but a better cheaper, faster Apple II.

2. Jump to the next curve

It’s not enough to build a better machine – companies have to find a way to take what they do to the next level, which may not resemble what they currently do. Kawasaki pointed to the evolution of the ice industry, which went from ice harvesting (go where the ice is and bring it back) to ice factories (make ice and deliver it), and then to refrigerators (consumers can make and store their own ice).

That’s because the old companies failed to see what the next stage was, and this was in large part because they defined their business by what they did and refused to deviate from that model. Famous modern day examples include Kodak, Polaroid and Smith Corona.

Referring to the concept of “MVP” (minimum viable product, a term coined by Frank Robinson to describe a product with just enough features to please early adopters with the plan of improving it as you go), Kawasaki proposed adding two more Vs to that acronym – valuable and validating – because viability alone is no longer enough.

“You can create something that’s viable but not valuable – it doesn’t put a dent in the universe,” said Kawasaki. As for validation, “Does what you ship… validate the vision of your company? Does it reflect the way you think the world will evolve?”

Kawasaki said that one of the many characteristics that separated Steve Jobs fron the rest of the Silicon Valley pack is that he thought of engineers as artists. “You need to appreciate great design.”

Whatever you do, some may love it, some may hate it, but that’s okay, said Kawasaki. “What’s worse [than being hated] is when people don’t care – when they see you as irrelevant.”

As an example, TiVo is a product that’s loved by consumers who want to time-shift their video, but hated by advertising agencies and their clients because it enables viewers to skip ads.

There will always be people telling you your out-of-the-box idea will never work. Steve Jobs was told that when he started the App Store to go with the iPhone, Kawasaki noted.

Kawasaki said that naysayers are generally “Bozos”, but that the more dangerous type aren’t the obvious “loser” types, but successful people whose opinion may carry more weight.

“They may be successful at what they do, but don’t assume they always know what they’re talking about,” said Kawasaki, citing famous examples of bad technology predictions such as the one from IBM president Thomas Watson, who said in 1943: “I think there is a world market for maybe five computers.”

You have to be willing to change direction when circumstances require, and sometimes that means changing a strategy or idea – which is hard for some companies to do because they’re afraid it will make them look bad.

“Some people think that if they change their mind, it’s like admitting that they’re wrong, or stupid,” he said. “I think it’s quite the opposite.”

Kawasaki cited the example of Apple’s original approach to iPhone apps: making it an entirely closed system where new features are added via Safari plug-ins. A year later, Apple changed tack completely and opened the ecosystem to apps developers – a 180º reversal that paid off.

“Changing your mind is a sign of intelligence,” Kawasaki said.

The object here is to create products and services that strike the right balance between value and uniqueness – such as the iPod, the Breitling emergency watch or a car that can parallel-park itself.

In other words, create products, ship them and wait to see how customers respond – not just the intended customers but others you may not have realized were customers. The classic Apple example is the MacIntosh, which Apple assumed people would want to use for spreadsheets, database and word processing – but it was desktop publishing that turned out to be the most popular app.

“One thing we do in Silicon Valley better than anyone else is that we know how to declare victory,” he said, equating it to throwing stuff at the wall and painting the bullseye around what sticks.

Another example, he said, is SkinSoSoft, a cosmetics beauty product from Avon that sold well not because of its cosmetic quality, but because moms discovered it was a great insect repellant for kids.

Following up on the MVVVP concept, Kawasaki said that once you ship that MVVVP, you must be willing to upgrade it as you go, just as software companies do with v1.0, v1.1. v2.0, etc.

“This is the hardest thing for a disruptor to do,” he said, but it’s necessary because your new disruptive product is just the start of a long journey that could take years – just as it took Apple from 1984 to 2017 to come up with the iMac Pro. Don’t obsess over shipping a perfect product – get it out there and make improvements as you go along.

The original version of this article first appeared in Disruptive.Asia.

Views expressed in this article do not necessarily reflect the views of ITU.

X
5G: Prepare for the future with high performance and flexibility…5GBy Jan Färjh The original version of this article first appeared in ITU Telecom World. Looking back a few decades and focusing on the previous generat…